Obama weighs in on contentious union vote at Volkswagen plant 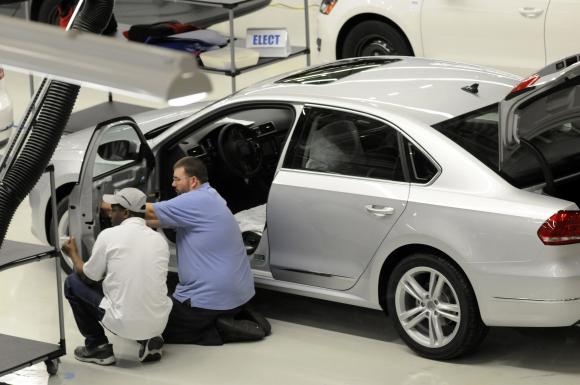 P resident Barack Obama on Friday waded into a high-stakes union vote at Volkswagen AG's plant in Tennessee, accusing Republican politicians who oppose unionization of being more concerned about German shareholders than U.S. workers. Obama's comments, made at a closed-door meeting of Democratic lawmakers in Maryland, came as the vote to allow union representation at the Chattanooga plant drew to a close. The vote will have wide-reaching implications for the auto industry in the South, where all foreign-owned assembly plants employ nonunion labor, and for the United Auto Workers union, which could use a victory to reverse a decades-long downward spiral. The vote has faced fierce resistance from local Republican politicians and national conservative groups who have warned that a UAW victory could hurt economic growth in Tennessee. While voting was under way on Wednesday, Republican U.S. Senator Bob Corker said VW could announce new investment in the plant if the UAW lost the secret ballot. Facing accusations that he was seeking to influence the ballot process, Corker defended his statement as "true and factual" in an interview with Reuters, despite Frank Fischer, chief executive of VW Chattanooga, saying that there was "no connection" between the vote and the possible investment.

Obama's interjection in the war of words on Friday, albeit behind closed doors, underscored how much is stake in the three-day vote by VW's 1,550 hourly workers. The vote is due to end at 8:30 p.m. ET and the results could be announced soon after that.

Obama said everyone was in favor of the UAW representing Volkswagen except for local politicians who "are more concerned about German shareholders than American workers," according to a Democratic aide who attended the meeting with Democratic lawmakers in the House of Representatives.

Voting turnout was heaviest on Wednesday, according to local workers, with an estimated 1,000 employees casting ballots. On Friday, when the plant normally is shut down for weekly maintenance, many of the maintenance workers were expected to cast their paper ballots, all of which will be counted individually after the vote closes.

For the UAW, whose U.S. membership has plummeted by 75 percent since 1979, a win could open the door to organizing other foreign-owned auto plants in the U.S. South, the cornerstone of UAW President Bob King's strategy.

A loss could accelerate the decline in membership, now at just under 400,000 from a peak of 1.5 million. It also would reinforce the widely held notion that the UAW cannot make significant inroads in a region that historically has been steadfastly anti-union. Virtually every state in the U.S. South has passed right-to-work legislation that gives workers the choice of joining a union and paying union dues.

For VW, the stakes also are high. The German automaker invested $1 billion in the Chattanooga plant, which began building Passat mid-size sedans in April 2011, after being awarded more than $577 million in state and local incentives. VW executives have said a new seven-passenger crossover vehicle, due in 2016 and known internally as CrossBlue, could be built at either Chattanooga or Mexico.