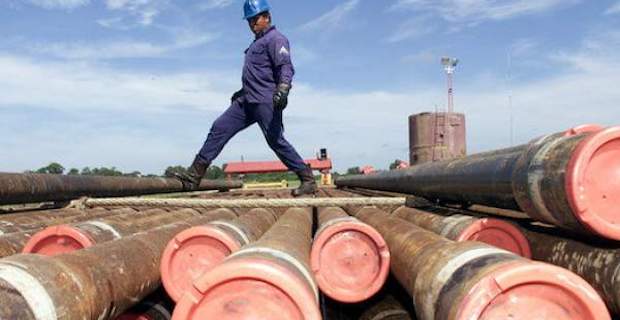 The low oil price environment in the global market is dragging the Middle Eastern oil-producing countries to collapse, whose economies are strongly dependent on crude oil production and exports.  Due to the novel coronavirus (COVID-19) keeping global oil consumption weak, and the oil price war between Saudi Arabia and Russia, crude oil prices are fluctuating below $30 per barrel since March 6 when OPEC and non-OPEC nations failed to reach an output curb deal. Low crude prices are seriously threatening most oil-producing countries in the Middle East and North Africa (MENA) who need higher oil prices to balance their budgets.  Nigeria needs a breakeven price of $144 per barrel of Brent crude on average to balance its government balance this year, while Bahrain requires $96 a barrel, according to data from global rating agency Fitch Ratings. Saudi Arabia, OPEC heavyweight and the world's largest crude exporter need a breakeven of $91 per barrel, while Oman needs $82 a barrel, Abu Dhabi requires $65 per barrel and Qatar needs $55 a barrel, the data shows.  While Algeria needs $109 per barrel of average Brent crude in 2020 to balance its budget, Angola has a breakeven price of $55 per barrel, and the United Arab Emirates (UAE) needs $70 a barrel, according to International Monetary Fund (IMF) data.  The data shows that Venezuela and Libya each need around $100 per barrel to balance their budgets this year, while Iraq stands at $60 a barrel and Iran is at a whopping $195 per barrel.  For non-OPEC countries such as Russia, Mexico and Kazakhstan, an average Brent crude price of $42 per barrel, $49 per barrel and $58 per barrel are needed this year to balance their budgets.

Oil-producing countries in the MENA region are also expected to have lower economic growth rates in 2020 due to low oil prices, according to the International Institute of Finance (IIF).  Saudi Arabia is now estimated to grow by 0.7% this year, down from the previous forecast of 2%. While Kuwait's economic growth expectation is lowered to 0.8%, from 2.8%; the UAE now has a growth forecast of 0.6%, down from 1.9%. Iraq's economy is anticipated to contract by 0.3%, instead of growing by 3.2%; and Iran's economy is expected to shrink by 8.4% this year, instead of 5.1%.  If oil prices would average around $40 per barrel this year, IIF said it estimated nine oil-exporting countries in the MENA region to see their hydrocarbon earnings decline by a total of $192 billion.

Saudi Arabia to have the biggest fallout among GCC

"The oversupply is growing exponentially as refiners remain well off-peak and I have demand down by about 38 million barrels per day," Mark Rossano, an energy analyst at the U.S-based market intelligence company Primary Vision, told Anadolu Agency. He stated that China has already canceled 10 shipments from Saudi Arabia in April and May, and more cancellations are arising for Nigeria, Angola, Russia, and Iraq.  With the oil demand down and the glut of oil supply in the global oil market, he said oil prices may continue to stay below $30 per barrel.  The low oil prices damage Iraq, Iran, Nigeria, Angola, and Saudi Arabia most, according to Rossano. "The UAE and Qatar are a bit more insulated with their sovereign wealth fund, and liquified natural gas (LNG) plays a big role for Qatar which has been a huge benefit to the country in the last few years, he noted.

"Qatar will not get the same kind of impact compared to the rest although 2020 will be a 'lost' year for LNG. However, the trajectory is still in their favor over the long term," Rossano said.

He pointed out that Kuwait and the UAE are "fairly insulated" for now, but Saudi Arabia has the biggest fallout among the Gulf of Cooperation Countries (GCC).

"Additionally, the ones that are facing serious at-home risk are Iraq, Iran, and Nigeria," Rossano said, pointing out to local protests in Iran and Iraq that erupted at the beginning of this year.

He said he anticipates that the next 18 months will be painful especially for those heavily dependent on oil revenues.

"The recession started in the last quarter of 2019 as refined product demand started to weaken in May of last year. The situation only got worse as the year progressed," Rossano said.

"Refinery margins were abysmal across the global complex with distillate the only saving grace, but that quickly evaporated leaving units running at a negative margin. This started economic run cuts well ahead of COVID-19. The virus was just jet fuel dumped onto a raging forest fire, so terrible pricing will persist into 2021," he explained.

According to International Energy Agency (IEA) data, the income of Iraq will decrease by around 70% to $30 billion this year due to the low oil prices, while Nigeria is forecasted to see a 75% drop in its revenues from $45 billion to $11 billion level this year.

Ali Al-Saffar, the Middle East and North Africa Program Manager at the IEA said some countries will be better equipped to deal with a period of low oil prices than others.

"For relatively large producers with modest local population sizes, like Kuwait, the UAE and Qatar, large financial savings will provide some protection from the fiscal pressure brought on by lower oil prices. Others, like Iraq and Nigeria, do not have the same luxury," he noted.

The countries will need to get past the most difficult short-term crisis anyway they can by tapping reserves and running deficits of accumulating debt, according to the expert.

"But in the longer term, a rethink of the economic structure is needed, including by incentivizing a larger role for the private sector involvement in a diverse range of sectors to reduce the overall dependence on oil and gas revenues," Al-Saffar added.

Keywords:
Oil PricesMiddle East
Your comment has been forwarded to the administrator for approval.×
Warning! Will constitute a criminal offense, illegal, threatening, offensive, insulting and swearing, derogatory, defamatory, vulgar, pornographic, indecent, personality rights, damaging or similar nature in the nature of all kinds of financial content, legal, criminal and administrative responsibility for the content of the sender member / members are belong.
Related News