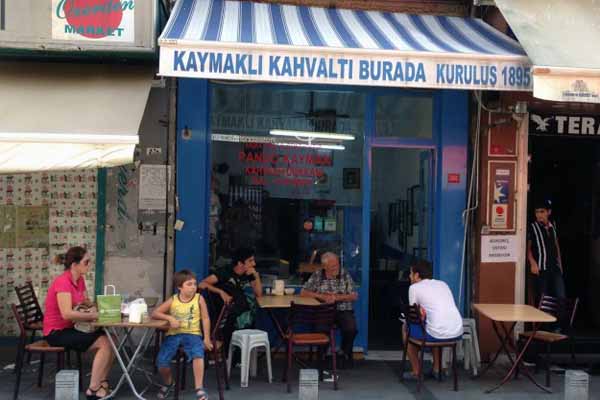 There should be an atmosphere of impending doom in the little blue shop. It is supposed to be the last day for Pando to make his famed clotted cream and honey for the utmost delight of his customers. The last day after more than 100 years of serving breakfast every single day.  But there is no gloom in the shop. It is crowded – "everyone thought this was going to be the last day," says Pando's wife Done. She is being modest: the shop is always crowded. The 119-year-old iconic breakfast shop, Pando Kaymak, in Istanbul's Besiktas district, is on the brink of becoming a part of the long history that it had witnessed.  Pando's landlord has reportedly taken advantage of a recent law that permits him to evict his tenants of a minimum of 10 years without having to provide justification. Local media had announced Pando Kaymak's demise for this past Sunday but Done Shestakof, the wife of 92-year-old Pandelli Shestakof, aka Pando, said on Sunday that they actually did not know the exact time of eviction.

Pando had initially been given until August 15 to vacate the premises.

In protest, the shop's regulars and many otherIstanbulites launched campaigns via Twitter using hashtags such as  #savepando or #pandokapanmasın. The initiative garnered enough attention to involve local Besiktas Mayor Murat Hazinedar.

His mediation staved off the eviction for 20 days.

However, the couple said they had stopped fighting against the eviction order.

"We fought a lot. But we are exhausted and we are old. We have just given up," the couple says.

More than a simple cream shop, Pando Kaymak represents tradition in Istanbul, the unchanging face of Besiktas for many Istanbulites.

Last year, in an interview with Turkish daily Hurriyet he said, "People feel at home when they come to our shop. The customers did not even let [let there be new] coating to keep the nostalgic mood of the place. They love this place."

Pando spent his entire life in the cream shop and Besiktas, the district he was born and raised in. His father opened the shop in 1895.

At first though, Pando was not immediately lured into the family business and he began working as a mechanic.

"I quit working as a mechanic because I wanted to keep my father's shop open," he recalls in the Hurriyet interview. "I saw many people, many incidents... I am one the eldest shopkeepers in Besiktas."

Many in the neighborhood, and throughout the city, believe Pando Kaymak is one of the latest victims of gentrification projects that have popped up in throughout Istanbul neighborhoods in the past ten years.

Although the Gezi park protests in June 2013 aroused intense interest in the gentrification of Istanbul, the most populous city in Turkey is still undergoing tremendous transformation.

Istiklal Street, the most alive district of Istanbul, has also known the loss of its older traditional shops, including the 120-year-old Rebul pharmacy, and the 80-year-old Kelebek corset shop.

But there is hope for Pando Kaymak yet. The mayor of Besiktas called on Monday to tell the couple that he was trying to find a solution, according to Pando's wife, Done.