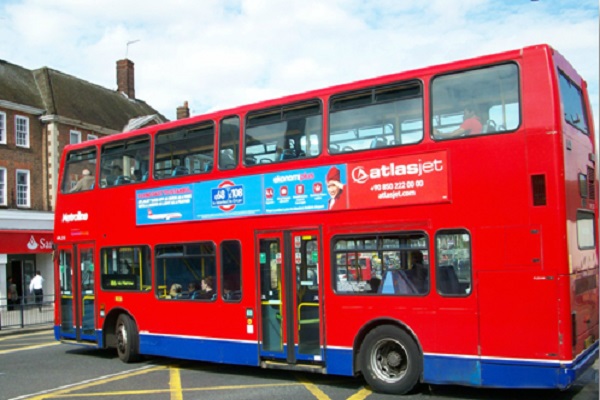 The campaign has kicked off with ‘superside’ advertisements on London buses and is set to run until the middle of May. Further sites have been secured at key London underground and train stations, as well as at London Luton airport.

Atlasjet’s UK Sales Manager, Mustafa Ebgü said “It is exciting to see our branding on the iconic London buses. Fortunately, we share the same eye-catching red colour, which definitely makes our adverts stand out! “

He added, “It isn’t just the creative work which is impressive though, our promotional fares have also been grabbing attention. One-way flights to Istanbul Atatürk start from just £68; and to Ercan from just £108.”

Atlasjet’s new flights launch on 2nd May and will operate 4 times a week initially, and daily starting from June. Atlasjet offers various connections from Istanbul, including to Antalya, Izmir, Gaziantep, Tehran, Tbilisi and Nizhnekamsk and passengers travelling to Ercan - North Cyprus could directly fly from London with a stopover in Istanbul, without leaving the plane.

The Atlasjet promotional campaign is being run by Turkey and North Cyprus specialist, Ocean Advertising, part of Wave Media Partners.

Visit www.atlasjet.com to book and for details.