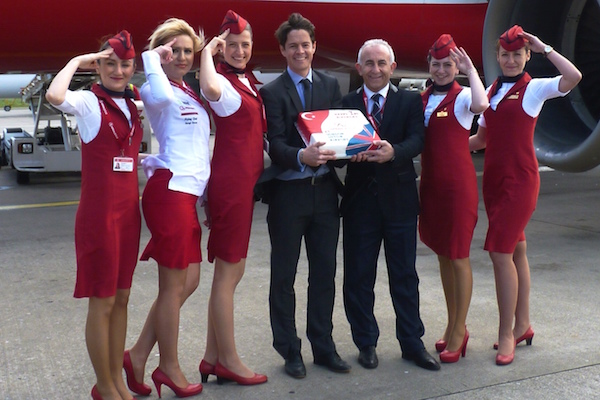 Atlasglobal celebrated the first anniversary of the launch of its London Luton-Istanbul Ataturk route. The route has been extremely successful, going from strength to strength. It launched with flights four times a week, and has been daily from June 2014.Simon Harley, Business Development Manager, LLA commented “We are delighted to celebrate a year of operations to Istanbul from London Luton with Atlasglobal, our partnership has gone from strength to strength and we look forward to many more years of successful operations.”Highlights from the past twelve months include: ‘Flying Chef’ service added to routes of three hours or more in duration, including the LTN-IST flight. The chef prepares special daily dishes, adding a personal touch to both Turkish and international cuisine. The Chef personally prepares some signature dishes on board for both EkonomiPlus and Business Class passengers, such as the Chef's dessert.Re-brand from Atlasjet to Atlasglobal in January 2015, in line with the company’s aim of becoming a truly global airline. Atlasglobal carried 4.27 million passengers across its network in 2014, an increase of 10%. At the same time, passenger numbers on international flights rose by 22%. The airline added new destinations from its hub at Istanbul Ataturk including Kuwait, Amsterdam, Almaty, Astana, Bishkek, Dusseldorf and Cologne. Atlasglobal prides itself on its high standards of customer service. Thanks to the  innovative and customer focused approach that it has brought to the private aviation sector in Turkey, Atlasglobal has been awarded first place in the “Airline” category in the 2014 Skalite Awards which are associated with “Quality in Tourism”. In 2014, the airline’s on-time performance for scheduled flights was 91%.

Atlasglobal offers a comfortable flight from London Luton to Istanbul Ataturk Airport with its 77cm wide seats on the 200-seat Airbus 321-200s. One-way EkonomiPlus fares to Istanbul start from just £68. Prices include online check-in, 25kg luggage allowance, complimentary in-flight meals and beverages. Business Class is also available for those who want to enjoy the additional benefits which are included. Agents can benefit from a generous service charge on all Atlasglobal flight bookings. Contact UK sales manager, Mr Mustafa Ebgu, for more details (Mustafa.ebgu@atlasglb.com) Stay in touch with Atlasglobal at facebook.com/atlasglobal and twitter.com/atlasglobalair