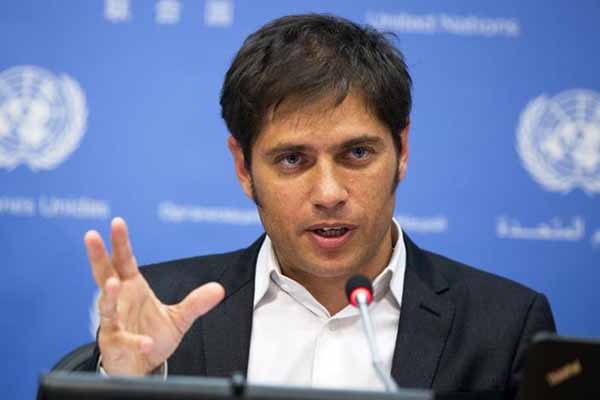 By Charles Newbery BUENOS AIRES, Argentina – Argentine Economy Minister Axel Kicillof has said the country wants to avoid a second default on its debts in 13 years, despite a US court order making his desire almost impossible to achieve. His comments came as Argentina faces the prospect of making a $539 million service payment on US bonds by July 30, or fall into default. “Nobody wants a default, nobody celebrates a default,” Kicillof said on Friday in a televised address to economy ministers of the Union of South American Nations in Buenos Aires. Instead of running the risk of a litany of lawsuits, Kicillof called for an extension for repaying the plaintiffs until after this clause expires at the end of the year. He said: “We are willing to negotiate and reach solutions. “Argentina is willing to pay everybody in conditions that are fair, equitable and legal, and without breaking Argentine or foreign law."
- Claims trigger
The government tried to make the payment last month, but a U.S. federal judge, Thomas Griesa, blocked distribution of the funds to bondholders on grounds that it would break his order to pay other creditors that had won a lawsuit in his court.
The other creditors, among them New York billionaire Paul Singer, recently won a drawn-out lawsuit against Latin America’s third-largest economy to get paid $1.5 billion in cash on bonds left over from a $100 billion default in 2001.
The plaintiffs must be paid at the same time as payment is made on bonds restructured after the default, when 92.4 percent of the creditors accepted 30 cents on the dollar.
However, Kicillof said that the country cannot pay the plaintiffs without violating a rights-upon-future-offers clause in the restructured bonds that would entitle creditors to collect the difference, or 70 cents on the dollar.
Paying the plaintiffs “would trigger claims” from the restructured bondholders of “between $120 billion and $240 billion for Argentina”, Kicillof said.
Griesa, who is hearing the case, has so far refused to grant the country more time, and the plaintiffs have slammed the government for refusing to sit down for talks.
- Debt crisis
This has raised expectations that the government could choose to default before settling and triggering what it says could be an avalanche of lawsuits from the restructured bondholders, that would make it harder to return to borrowing abroad.
Argentina has not sold bonds on global markets since before the 2001 default, leaving it reliant on central bank reserves to pay the national debt and cover imports.
The plaintiffs say that a court-ordered settlement will not violate the rights-upon-future-offers clause and argue that the clause can only be broken by a voluntary settlement.
If that is the case, the Economy Ministry said in a statement late on Thursday the plaintiffs should provide a financial guarantee to the tune of $120 billion to cover the settlement of any future lawsuits from the restructured bondholders.
If not, then the best option for resolving the debt crisis is to extend negotiations until after the clause expires at the end of 2014, the ministry said.
Kicillof said that if the country defaults on July 30, it will be because of Griesa’s court order that is acting as “an instrument of judicial extortion”.