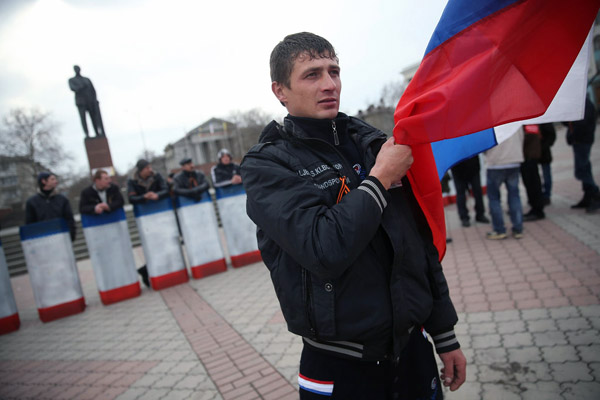 A day after the Russian Parliament granted President Vladimir V. Putin broad authority to use military force in response to the political upheaval in Ukraine that dislodged a Kremlin ally and installed a new, staunchly pro-Western government, the Ukrainian government in Kiev threatened war if Russia sent troops further into Ukraine. Russian troops stripped of identifying insignia but using military vehicles bearing the license plates of Russia’s Black Sea force swarmed the major thoroughfares of Crimea on Saturday, encircled government buildings, closed the main airport and seized communication hubs, solidifying what began on Friday as a covert effort to control the largely pro-Russian region. A pro-Russian crowd in Simferopol waved a Russian flag in front of a local government building guarded by armed men on Saturday.

The announcement of the reserve mobilization was an attempt by the rattled new government in Kiev to draw a line against Mr. Putin, an effort expected to continue later on Sunday when NATO holds an emergency meeting on Ukraine and the British foreign secretary, William Hague, visits Kiev in a sign of Western support. What began three months ago as a protest against the Ukrainian government has now turned into a big-power confrontation reminiscent of the Cold War and a significant challenge to international agreements on the sanctity of the borders of the post-Soviet nations.

Mr. Putin convened the upper house of Parliament in Moscow on Saturday to grant him authority to use force to protect Russian citizens and soldiers not only in Crimea but throughout Ukraine. Both actions — military and parliamentary — were a direct rebuff to President Obama, who on Friday pointedly warned Russia to respect Ukraine’s territorial integrity.

Mr. Obama accused Russia on Saturday of a “breach of international law” and condemned the country’s military intervention, calling it a “clear violation” of Ukrainian sovereignty.

In Crimea, the situation was calm but hardly placid on Sunday morning, with fewer soldiers visible on the streets. Some heavily armed soldiers without insignia had taken up positions around small Ukrainian military bases, but without trying to enter them.

At Perevalnoye, a small Ukrainian base some 15 miles south of Simferopol on the road to Yalta, scores of soldiers with masks, helmets and goggles, in unmarked uniforms, ranged along one wall of the base. Inside there were about two dozen Ukrainian soldiers, equipped with an armored personnel carrier.

Col. Sergei Starozhenko, 38, the Ukrainian commander, told reporters the unmarked troops had arrived about 5 A.M. and “they want to block the base.”

He said he expected them to bring reinforcements and call for talks. Asked how many men he has at his command, he said simply: “Enough.”

In Sevastopol, pro-Russian “self-defense” forces were blocking the entrances of the main Ukrainian naval headquarters. There was no sign of Russian troops, Ukrainian officers were at work inside and armed Ukrainians guards were on patrol behind the closed gates.

Pro-Russia demonstrators put up a banner reading: “Sevastopol without Fascism,” and urged Ukrainian officers to come over to their side rather than serve the “illegal fascist regime” in Kiev. The demonstrators shoved packs of cigarettes, candy and bottles of water through gate for the Ukrainian guards.

“They have to make a choice -- they either obey the fascists in Kiev or the people,” said Sergei Seryogin, a pro-Russia activist outside. Kiev, he said, “is illegal power” and should be ignored by all military and civil officials.