RAF Typhoon jets were scrambled to escort a passenger plane over the UK. 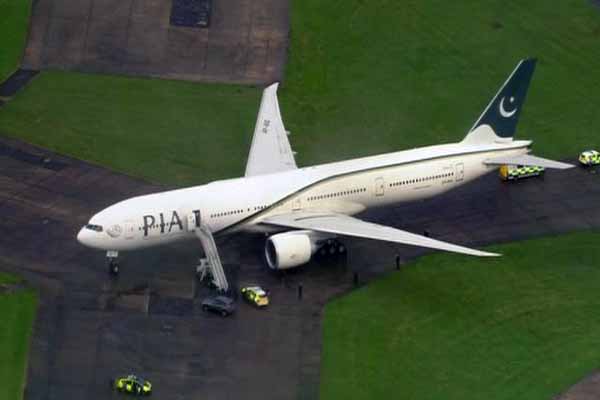 The British nationals being held are aged 30 and 41, Essex Police said.

Supt Darrin Tomkins said officers were investigating a "criminal offence" and had not found any "suspicious items".

He said specialist officers were carrying out forensic tests on the plane as the two men were questioned in custody.

The BBC understands the incident was not terror-related.

Passengers said they had heard threats had been made on board, but there has not been any official confirmation.

PIA said all the passengers were safe.

BBC defence correspondent Jonathan Beale said there was a suggestion there had been threats on board during the flight, involving some sort of weapon or bomb - although this has not been confirmed.

However, one passenger told the BBC that the pilot had informed them there had been threats.

The man said: "We were about half-an-hour away from landing in Manchester and we saw that the plane was taking different actions.

"We did not know anything about it other than the pilots announced that they have landed at Stansted. And we landed, safely. Then he announced that he had a threat from someone, which was why he had landed the plane."

AdvertisementThe BBC's Jonathan Beale: "Two men were arrested on suspicion of endangerment of an aircraft"

Another passenger, Umari Nauman, told Sky News cabin crew had said two men had repeatedly tried to get into the cockpit.

"The cabin crew informed us that basically they tried to come into the cockpit a few times and because they had been asked not to do that, they got into a bit of an argument with the crew and made a few threats."

Stansted said the pilot had alerted the authorities to the incident, but the airport did not say what that incident was.

Speaking about the passengers, an airport spokesman said: "They will be taken to a reception centre in the airport where police may wish to interview them about what they have seen. At some point police and the airline will arrange for their onward transportation to Manchester."

Stansted earlier said on Twitter it was operating normally.

Manchester airport said it expected passengers to be put on a coach from Stansted to Manchester later on Friday.