She is the fastest 400m runner for her native Turkish Republic of Northern Cyprus (TRNC) and the U23 national record holder for her adopted country of Turkey with a time of 52.89 seconds. 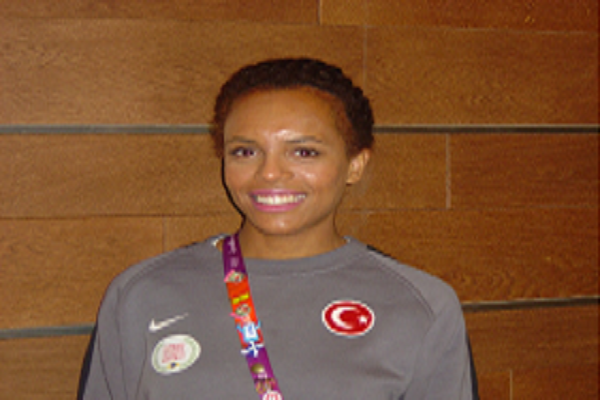 Meliz is expected to carry the baton on the second or third leg for Turkey. She and her relay team mates Elif Yıldırım, Sema Apak, and Birsen Engin have been dubbed the ‘fantastic four’ by the Turkish media, having smashed the national record with a run of 3.29.40 minutes in 2011. They followed this with Turkey’s second fastest ever 4x400m run earlier this year, making them one the top sixteen relay teams in the world and earning them the right to compete in the 2012 Olympics.

Born in Lefkosa (Nicosia), the capital of the TRNC, Turkish Cypriot Meliz is unable to represent the country due to its political non-recognition. The International Olympic Committee also bars Turkish Cypriots from participating as Independent Athletes under the Olympic Flag, insisting they take up citizenship of a recognised country in order to compete. While some athletes refuse to do so, Meliz opted to become a citizen of Turkey in order to fulfil her dream and compete with the best 400m runners in the world.

Meliz said, “I am so happy to be here in London. I can’t wait for the race on Friday. We know it will be tough, but we are raring to go. When I step out on that Olympic track, I will not just be representing Turkey, but also carrying the hopes and aspirations of the entire Turkish Cypriot nation. I feel so proud – the support for me from around the world is overwhelming.”

Her friends and family in the TRNC, along with Turkish Cypriots worldwide are all rooting for Meliz, with social media awash with support for the young runner. The Cyprus Turkish Community Association (the oldest Turkish Cypriot organisation in Europe), located in D’Arblay Street, Soho, invites all Turks in the vicinity to come and watch the historic race that is due to start at 19.10.

Ipek Ozerim, co-founder of human rights group Embargoed! who are spearheading a campaign to get Turkish Cypriots to participate under the Olympic Flag, said, “We are all so proud of Meliz. She has earnt the right to be at the Olympics and we wish her every success. Turkish Cypriots worldwide are buzzing with excitement that she is about to make history. But it also jars with us that Meliz has been forced to change her national identity and take up citizenship of another country simply to compete. It’s so wrong. The Olympic Charter clearly states that sport is a human right and discrimination on the grounds of race and politics is incompatible with the Olympic Movement.”