Turkey, Japan to set up university

Erdogan said on Tuesday that Turkey and Japan had agreed to found a science and technology university which would be based in Istanbul. 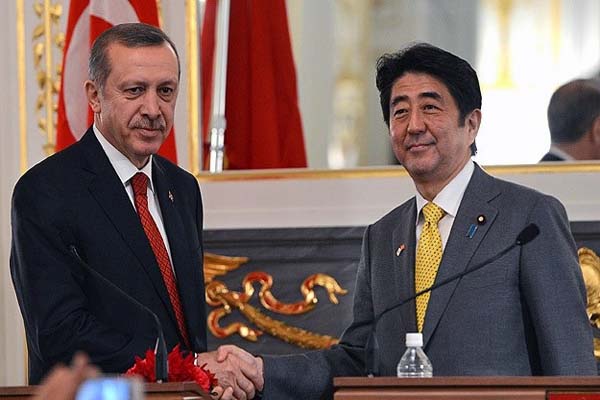 The establishment of the Turkish-Japanese Science and Technology University was announced during a joint press conference of Erdogan and his Japanese counterpart Shinzo Abe in Tokyo. Erdogan said they also agreed to launch negotiations for a free trade deal between the two countries. The Turkish-Japanese trade volume currenlty stands at $4 billion. The Turkish premier also announced that the handover ceremony of TURKSAT 4-A, a Japanese-manufactured communications satellite, would take place on Wednesday. Erdogan is expected to meet Japanese Emperor Akito later on Tuesday.

In October last year, Turkish Minister of Energy and Natural Resources Taner Yildiz said Japan would work on 4 to 5 alternative sites for the construction of a third nuclear power plant in Turkey.

Japan is currently building a nuclear power plant in the Black Sea city of Sinop, which is expected to become operational in 2023, the 100th anniversary of the founding of the modern Turkish republic.

The Turkish prime minister traveled to Japan as part of his South Asian tour, accompanied by ministers and businessmen with energy deals and economic relations at the top of his agenda.