The World War I with the slogan of Century Old Peace

Yunus Emre Institute commemorating the centenary of the World War I with the slogan of 'Century-Old Peace'. 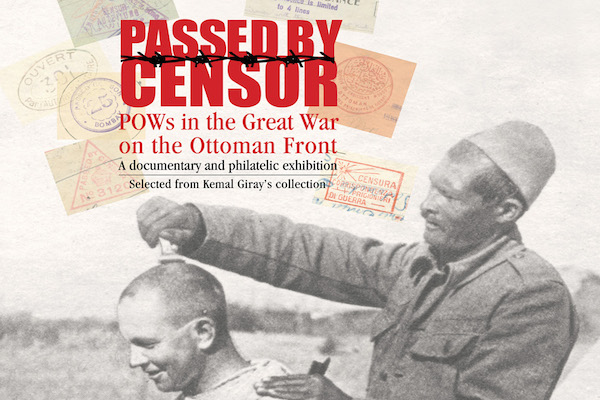 Yunus Emre Institute Turkish Cultural Centre London has opened a unique exhibition featuring philatelic and archival documents selected from the private collection of Kemal Giray, a key documentarian of World War I. It covers the stories of the prisoners of war from both sides, Alliance and Entente powers, at the Ottoman Front. Based primarily on philatelic material, the exhibition also shows letters, postcards, original photographs and documents. The exhibition's title, Passed by Censor, is inspired by the wording of a special stamp sealed on letters and envelopes confirming that the item is seen and censored by an official. Curated by Fahri Aral and designed by Sadik Karamustafa and Ayse Karamustafa, this show will also address unique excerpts from correspondences depicting a real picture of the life inside prison camps in and after the Great War, one of the most devastating in world history, from a human perspective. These include such striking subjects as demand of hockey balls by English prisoners, a poster for the announcement of a theatrical performance by Ottoman war prisoners, a photograph showing an Ottoman PoW arm in arm with his Austrian friend whom they escaped together from the camp, an escape plan sent to a PoW hidden in bananas as well as several photographs captured the sports activities at the camps.

In combining philatelic and documentary items with a graphic design and photography performance, photomontages and digitised snapshots, this exhibition creates a compelling body of work which combines century-old documentation with modern elements of photography and graphic arts.

The exhibition is held as part of a world-wide programme of activities by Yunus Emre Institute commemorating the centenary of the World War I with the slogan of 'Century-Old Peace'.

The exhibition has been hosted by David Burrowes, Member of Parliament for Enfield Southgate, at the Houses of Parliament with the honorary attendance of Rt Hon John Whittingdale MP, Secretary of State for Culture, Media and Sport at the opening ceremony on Monday 13th July 2015. The opening ceremony at the Houses of Parliament was organised with the partnership of Yunus Emre Institute London and ITSEB, the Association of Turkish Speaking Health Professionals. A great interest was shown by the visitors from cabinet members and also public until Friday 17th July 2015. The exhibition will be on display for visitors at the Yunus Emre Institute London from Tuesday 21st July until Friday 31st July 2015.