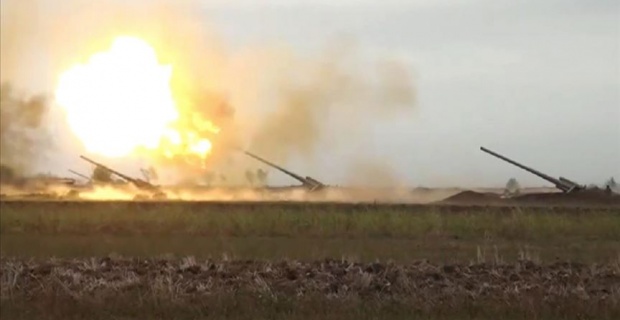 It also said some 200 tanks and armored vehicles, at least 230 artillery and missile systems, around 30 air defense systems, six command and observation areas, five ammunition depots, around 50 anti-tank guns, 110 cars and a Russian S-300 missile system were destroyed between Sept. 27-30.

An Armenian battalion serving under the 1st Army Command which was deployed in Tonashen village in Tartar district abandoned its position and fled with heavy losses, the ministry said.

"Due to the unsuitability and poor quality of the enemy’s military equipment, three of the missiles fired did not explode," said the statement.

Infrastructure suffered damage in the region, while no civilians were injured in the attacks, it said.

The ministry said in a separate statement that the Azerbaijani army captured the battle flag of an assault battalion of the Armenian army.

“The battle flag and documents of the 193rd separate assault battalion, which arrived to support the 6th defeated mountain rifle regiment of the Armenian army, have today been intercepted during the fighting in the Aghdara (Madagiz) direction,” Azerbaijan’s Ministry of Defense told Azertac, the country’s state news agency.

The Azerbaijani army hit the command area of the 41st regiment of the 18th motorized division of the Armenian Armed Forces, it said.

"The command of the Armenian forces in this region was completely destroyed. There are many dead and wounded among military personnel. Regiment command asks for help to evacuate the wounded," Azerbaijan's Defense Ministry added.

It added that the 4th Battalion of the Armenian Armed Forces moving towards Fuzuli district was brought under intense shelling.

As a result of the attacks, "the enemy suffered heavy losses in terms of manpower and military equipment," it said.

Azerbaijan's parliament declared a state of war Sunday in some cities and areas following Armenia's border violations and attacks in the occupied Upper Karabakh, or Nagorno-Karabakh region.

Since Armenia’s attacks Sunday, tensions have continued to escalate, with Turkey firmly standing with Azerbaijan.

Relations between the two former Soviet nations have been tense since 1991, when the Armenian military occupied Upper Karabakh, an internationally recognized territory of Azerbaijan.

Four UN Security Council and two UN General Assembly resolutions as well as many international organizations demand the withdrawal of the occupying forces.

The OSCE Minsk Group -- co-chaired by France, Russia, and the US -- was formed in 1992 to find a peaceful solution to the conflict, but to no avail. A cease-fire, however, was agreed upon in 1994.

The EU, Russia and NATO, among others, have urged an immediate halt to clashes along the frontier.

Keywords:
Armenia-AzerbaijanArmenia’s Attacks
Your comment has been forwarded to the administrator for approval.×
Warning! Will constitute a criminal offense, illegal, threatening, offensive, insulting and swearing, derogatory, defamatory, vulgar, pornographic, indecent, personality rights, damaging or similar nature in the nature of all kinds of financial content, legal, criminal and administrative responsibility for the content of the sender member / members are belong.
Related News