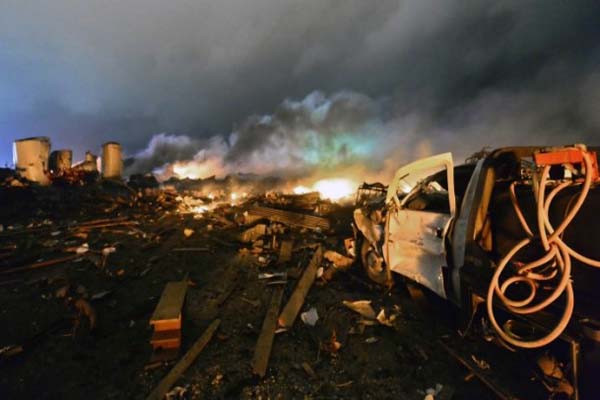 Police initially estimated that five to 15 people had died in Wednesday night blast, but officials said the death toll could climb as the search continued. They were treating the blast site as a possible crime scene. Three or four firefighters who responded to the explosion at a West, Texas, fertilizer plant on Wednesday evening are still missing, a police spokesman said on Thursday. A fire had broken out at the plant before the 8 p.m. explosion rocked West, a town of 2,700 people about 20 miles (32 km) north of Waco and 80 miles (130 km) south of Dallas. Witness Kevin Smith told CBS News he had just climbed the stairs to the second floor of his home when he felt the blast. "The house exploded. It was just a bright flash and a roar, I thought it was lightning striking the house," Smith said. "I felt myself flying through the air about 10 feet, and it took a second or two to realize that the roof had caved in on me so I knew it wasn't lightning."

Light rain was falling and winds had picked up to 22 miles per hour (35 kph) Thursday morning, conditions that could complicate the recovery effort or prompt additional evacuations.

"I've never seen anything like this," McLennan County Sheriff Parnell McNamara said. "It looks like a war zone with all the debris."

The explosion came two days before the 20th anniversary of a fire in nearby Waco that engulfed a compound inhabited by David Koresh and his followers in the Branch Davidian sect, ending a siege by federal agents.

About 82 members of the sect and four federal agents died at Waco.

Ground motion from the blast, triggered by a fire of unknown origin at the West Fertilizer Co plant, registered as a magnitude 2.1 seismic tremor and created a jolt felt in Dallas and beyond, the U.S. Geological Survey reported.

Waco Police Sergeant W. Patrick Swanton said investigators had not yet established what caused the fire or blast.

"We are not indicating that it is a crime, but we don't know," Swanton said early on Thursday, nine hours after the blast. "What that means to us is that until we know it is an industrial accident, we will work it as a crime scene."

West Mayor Tommy Muska said five or six volunteer firefighters who were among the first to arrive at the fertilizer plant were missing.

Firefighters had been battling the fire and evacuating nearby houses and a nursing home for about 20 minutes before the explosion occurred.

Texas Public Safety Department spokesman D.L. Wilson said about half the town, eight to 10 blocks, had been evacuated and that "we might even have to evacuate on the other side of town" if winds shift.

But emergency management personnel said there was no immediate danger to the public from the smoke, Swanton said.

Wilson said 50 to 75 houses were damaged by the explosion and fire, and a nearby 50-unit apartment complex had been reduced to "a skeleton standing up." Muska put the number of destroyed homes at between 60 and 80.

Wilson said 133 people were evacuated from the nursing home, which was heavily damaged, but it was not known how many residents had been hurt. A middle school also was badly damaged.

Three hospitals in Waco and Dallas reported treating more than 160 injuries from the blast.

"We are seeing a lot of lacerations and orthopedic-type injuries ... things you would expect in an explosion," said Argueta at Hillcrest Baptist.

Jason Shelton, 33, a father of two who lives less than a mile (1.6 km) from the plant, said he heard fire trucks heading toward the facility five minutes before the explosion and felt the blast as he stood on his front porch.

"My windows started rattling and my kids screaming," Shelton said. "The screen door hit me in the forehead ... and all the screens blew off my windows."

The Obama administration said it was monitoring local and state response through the Federal Emergency Management Agency.

The U.S. Chemical Safety Board said it is sending a "large investigation team" to the scene.