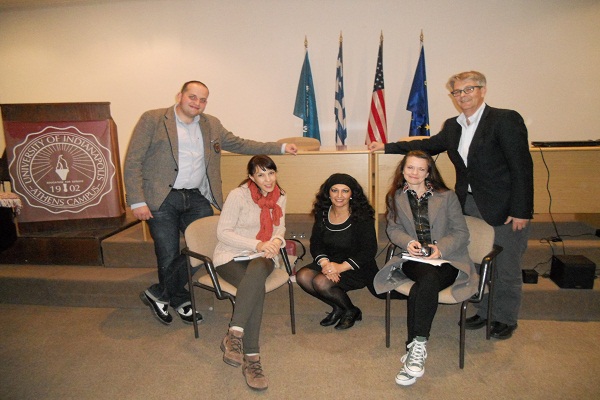 Semra Eren –Nijhar was a speaker at the recently held Conference on ‘Memory, Peace, Security’ in the capital city of Greece, Athens. Eren-Nijhar’s paper was presented on behalf of Cyprus Turkish Association at the University of Indianapolis.The conference took place despite the on-going challenges of the National Strike and general upheaval with the national economy and its political landscape. The conference held over two days in November, explored number of areas including ’Memory in Media, Personal Memories, Memory and Security, Memory in Philosophy’.

It was made even more remarkable as Eren-Nijhar was able to challenge some of the historical memories that continue to be reinforced in the minds of local and international communities through events during inter- war period of 1919-1923 of what is now modern day Turkey. Eren-Nijhar specifically spoke about the experience of Turkish people in and around Izmir during the period of the fall of the Ottoman Empire and the displacement of Greeks from Turkey. This was appreciated by the conference organisers and delegates alike as they commended her interventions which threw an additional and positive angle from ‘Turkish memory’ perspective.

Eren-Nijhar said that,  “this was a real eye opener when you experience memory of other cultures from their perspective and they often go on unchallenged and it is important to put the other side of the story to them, they often feel uncomfortable and threatened. It is important to explore intellectually their narrative with evidence to back up the assertions with facts. This was all welcomed and the conference was a delightful success with all the academics who participated from different countries.

Most importantly with the presentation on the Greek poet “George Seferis: Poetry and Diplomacy”,  it was interesting to explore how his life was similar to the Turkish poet Osman Turkay, and how both poets gained international fame through their poetry and used their poems for the purpose of diplomacy”.

At the conference session on ‘Memory, Peace and Security’ talking about two different poets from diverse backgrounds and from different countries and finding parallels in their work  and what they both have done in achieving peace by the tool of poetry provides hope for future Peace between countries and their peoples.