IFJ Demands Accountability for Violence against Journalists in Iraq 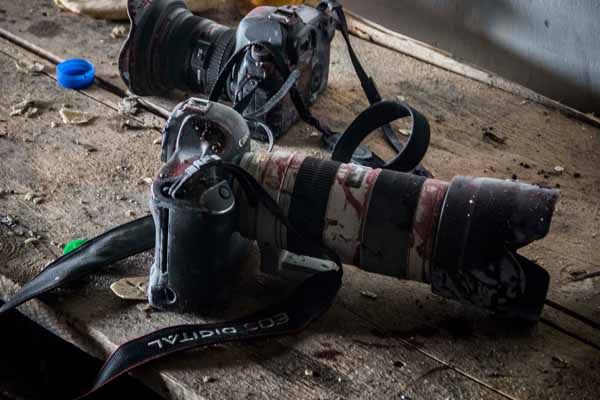 In a statement to the special session on the abuses committed by the Islamic State and associated groups in Iraq convened by the United Nations Human Rights to day in Geneva, the IFJ highlighted the impunity for killings, abductions and other serious violations of human and humanitarian law targeting journalist which various warring parties in Iraq continue to enjoy. The IFJ welcomed the unified reaction of the international community, calling for the IS killers of American journalist James Foley to be held accountable, but condemned the failure to investigate killings of over 350 journalists who have died since 2003 at the hands of both armed groups and forces of members of the coalition which invade the country. Commenting on the IFJ statement and today’s statement made by international freedom of expression rapporteurs, IFJ President, Jim Boumelha, said: “While we welcome the strong statement made jointly today by the international freedom of expression rapporteurs, it is of great concern that they see attacks on journalists in Iraq purely through the prism of the heinous crimes committed by the Islamic State in Northern Iraq.

"Since the invasion of Iraq in 2003, it has been open season on journalists with over 350 journalists and media workers killed. And it is a missed opportunity that, at the special session on Iraq, the rapporteurs do not echo the IFJ statement to focus on all the murders and call for those guilty to be made accountable.”

The Federation, which together with its affiliate in Iraq, the Iraqi Journalists’ Syndicate (IJS), spearheaded the campaign for justice to all journalists who lost their lives, called on the Human Rights Council to develop a clear strategy to hold to account all belligerents in Iraq responsible for killing journalists.

In particular, it urged the Members of the Council and of the United Nations to mark their commitment to UN International Day against impunity for crime against journalists which will be marked for the first time on 2 November 2014 by adopting the following measures:

• Calling on the government of Iraq to investigate all cases of journalists’ murders which remain unresolved and extending all assistance needed for this purpose, under the UN Action Plan for the safety of journalists and the issue of impunity ;

• Condemning all abductions of journalists by the self-proclaimed Islamic State and associate groups in Iraq and demanding immediate release of all journalists currently detained by these groups both in Iraq and Syria;

• Establishing a special unit in the Office of the High Commissioner to develop early warning system over the threat to journalists, in close collaboration with UNESCO, the International Federation of Journalists and other organisations defending the safety of journalists for a timely action;

• Organising regular debates, preferably on the UN Day against impunity for crime against journalists to review strategies and agree on new initiatives, in consultation with journalists’ organisations and representatives.