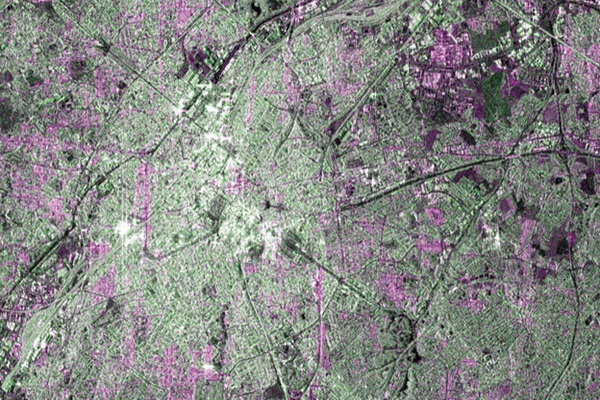 Launched on 3 April, the spacecraft is part of a fleet of orbiting sensors that will go up over the next few years to monitor the state of the planet. Its maiden pictures depict Brussels, flooding in Namibia and one of the mightiest ice features on Earth - Pine Island Glacier in Antarctica. The images give a flavour of the sort of work Sentinel-1a will be doing. Radar data is particularly useful for urban planning purposes, for making maps following natural disasters, and for monitoring remote locations such as polar ice fields. The sample of images released by the European Space Agency (Esa) is just a taster. The satellite's imager will require further calibration before full operational service can begin in about three months' time.

"It's going fine; the satellite is performing really well - as you can tell from the new images," confirmed Ian Shurmer, who leads the team that is operating the Sentinel from Esa's "mission control" in Darmstadt, Germany. "We took the very first image just three days after launch, but that was just a functional test. We're now operating the Synthetic Aperture Radar instrument on a daily basis, with the input of [the mission planners]." One task requiring attention is a refinement of the Sentinel's near-700km-high orbit. It is a few kilometres lower than perfect in its semi-major axis, but Shurmer's team can easily fix this with a sequence of firings on the spacecraft's thrusters. And in what is a sign of the times, the engineers have already had to manoeuvre Sentinel-1a to avoid the possibility of a collision with a defunct American satellite. Space debris is a growing problem, and Esa's operations teams have to be alert to other objects moving through their orbits.

"Maybe once or twice a year, you have to give yourself a little nudge to get out of the way of something," explained Shurmer. "We just pushed Sentinel-1a down by about 50m to make sure nothing happened."

The depiction of Brussels in the first batch of pictures is apposite. The Belgian capital hosts the EU's executive arm, the Commission. Sentinel-1a and the other sensors that will follow represent a flagship space project for the European Union, which has committed billions of euros to the endeavour. The satellites fit into a programme called Copernicus, which will draw together all sorts of information about the health of the Earth, not just from space. The data is expected to drive myriad applications, ranging from air quality updates to crop-performance monitoring, from water-resource management to transport infrastructure planning. The sample images on this page have been coloured artificially to show up particular features. In the picture of Brussels, red-blue picks out the urban areas with white denoting the high-density, downtown locations. Green corresponds to vegetation, and black to waterways and low-reflective areas such as airport runways. The image of flooding on the Caprivi plain from the Zambezi River in Namibia illustrates radar's key advantage in Earth observing - its all-weather capability. Radar sees right through cloud. This makes it an extremely powerful tool to follow up the havoc resulting from heavy rainfall.

The radar pulse bounces away from the satellite when it hits a smooth water surface, revealing very efficiently those areas that have been inundated by floods. For radar, it makes no difference, either, whether the Earth is illuminated.This means Sentinel-1a can be used to monitor polar ice streams in mid-winter when the Sun barely gets above the horizon for great swathes of the Arctic and the Antarctic. Pine Island Glacier, for example, which drains into the ocean something like 20% of all the ice flowing off the west of the White Continent, calved an enormous iceberg in July last year - the middle of the Southern Hemisphere winter. This will have to be monitored to ensure it does not become a hazard to shipping. Copernicus is the EU's second major space project after the Galileo satellite-navigation system, which is also in the process of roll-out. As with "Europe's GPS", Esa has been engaged as the procurement agent, designing the satellites' requirements and contracting with industry to produce them.