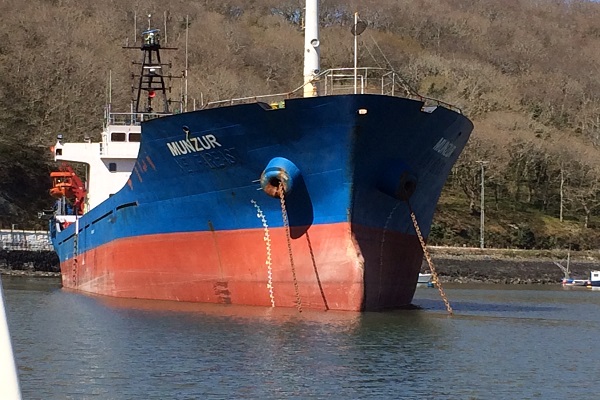 The Panamanian-flagged, Turkish-owned vessel Munzur was detained by the UK’s Maritime and Coastguard Agency for multiple failings (see www.dft.gov.uk/mca/mcga07-home/newsandpublications/press-releases.htm?id=E9F94A932A35E50E&m=4&y=2014). The ITF (International Transport Workers’ Federation) is assisting the crew, most of whom are desperate to leave the unhygienic and filthy vessel and return home.

There are 12 crewmembers, from five different nationalities. They report that all except one of them were being paid below the ILO minimum, with one earning just USD400 per month. At least five of them haven’t been paid since they joined the vessel in January/February.

The crew is owed over USD35,000. Nine of them no longer want to sail on the vessel and have asked the ITF to legally challenge the company on their behalf and secure the owed wages and repatriation costs.

ITF inspector Darren Procter is helping the crew. He explained: “The contracts of employment onboard are in breach of many Maritime Labour Convention regulations, and there are allegations that payment was made to secure employment.

“Living conditions are appalling, with the vessel having no hot water at the time of arrest, no washing machines, filthy bed linen, low levels of fresh food, unsafe electrics and a sanitary system which relies on a 45 gallon drum full of sea water.”

He concluded: “We have given the company a deadline of 17:00 today to pay the crew and organise repatriation. Failing that this vessel will have to be arrested.”