The first edition of Charlie Hebdo since the massacre at its Paris offices has not shied away from controversy, featuring cartoons of a crying Prophet Mohamed, 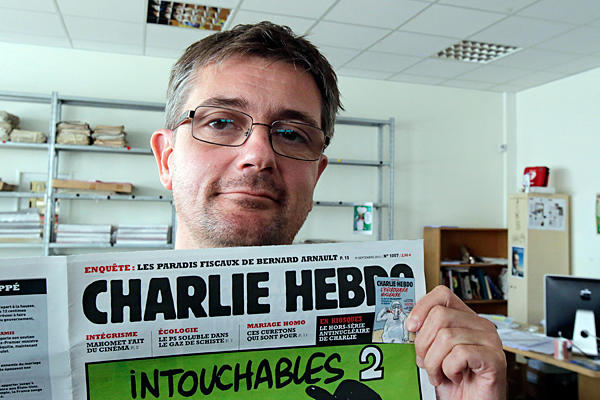 The cover shows the weeping Mohamed, holding a sign reading "je suis Charlie", which has become a global mark of solidarity, with the words "all is forgiven" written above him. Journalist Zineb El Rhazoui said the cover meant the magazine was forgiving jihadists for the attack. The satirical magazine defiantly published the cartoon after being targeted for previous depictions of the Prophet and has faced yet more threats of retaliation from Islamic extremists. Before the new edition was even released, one of Egypt's top Islamic authorities warned Charlie Hebdo against publishing more cartoons of Prophet. Dar al-Ifta, which is in charge of issuing religious edicts, called the planned cover an "unjustified provocation" for millions of Muslims who respect and love their spiritual figurehead and warned the cartoon could spark a new wave of hatred. Criticism and threats immediately appeared on militant websites, with calls for more attacks on the newspaper and anonymous vows of retaliation from extremists.