Boris Johnson’s comments came in Moscow, during a televised public exchange before a meeting with Russian Foreign Minister Sergei Lavrov. 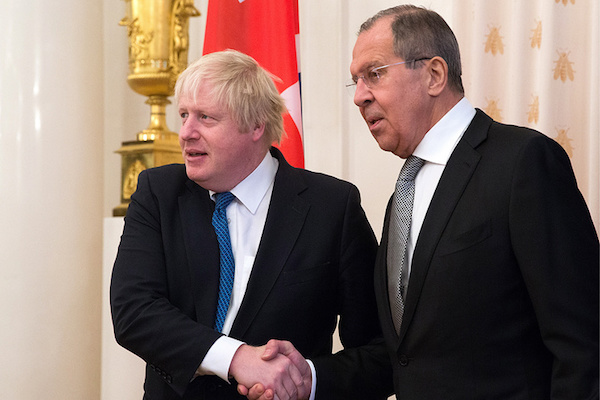 But Lavrov said they would prefer to discuss those matters in private, admitting, “It’s no secret that our relations are at a low point and that’s not at our initiative.”

"In my opinion both sides want to find ways to overcome" bilateral problems in ties, he said.

He added, “We’ve noticed you and other Western countries have your reasons for this and you prefer to speak about them publicly. We would prefer to discuss these issues directly, not in public through microphones.”

Johnson said: “We must not allow ourselves to be defined by these problems,” adding: "I am a Russophile, a committed Russophile ... So, be in no doubt that I want to see improvement in the relations between our peoples."

Lavrov accused the U.K. of making "insulting" statements but he said he had agreed with Johnson on the need to work together on the UN Security Council.

Johnson added that there are a number of issues of global importance, such as Syria and North Korea, and the countries should try to work together.

Johnson's visit is the first by a British foreign secretary in five years. British-Russian relations have been tense as Britain has backed EU sanctions on Russia after its unilateral annexation of Crimea in 2014 and alleged Russian cyber-interference in Western elections.

Johnson cited evidence of “Russian intervention in elections in Germany, Denmark, France, and the United States."

“We know what you are doing. And you will not succeed,” British Prime Minister Theresa May said in a speech last month accusing Russian President Vladimir Putin of cyber-espionage.

Russia’s March 2014 annexation of Crimea, and its support for separatists in Eastern Ukraine, led Western powers, including the EU, to impose sanctions on Moscow.

Along with the UN General Assembly, the U.S., the EU, UK and Turkey do not recognize Crimea as Russian territory.