During this trip he saw the desperate living conditions for ordinary people in Syria including their struggle for food. 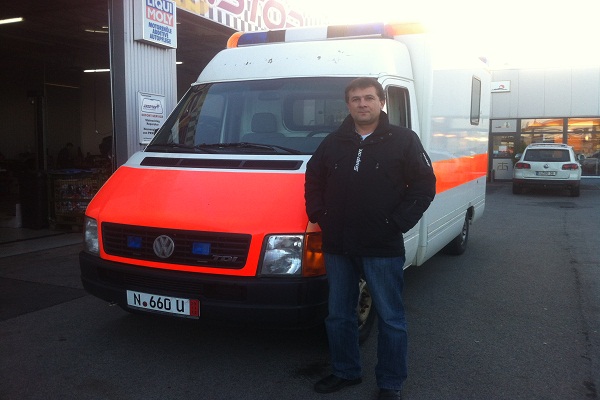 During this trip he saw the desperate living conditions for ordinary people in Syria including their struggle for food. He witnessed the carnage of the war. He also saw the urgent need for more medical support for injured civilians. Just over a month later he has left Bristol again to purchase a second ambulance for Syria.

FIRST AMBULANCE TO SYRIA Sakir left on his first mercy mission to Syria on 23rd September, he flew to Germany where he arranged and purchased a suitable left-hand drive ambulance. He then set off and drove on his own, overland through Macedonia, Bosnia to Turkey. The sunshine yellow ambulance, (photos enclosed) was re-fitted with emergency equipment, defibulator and oxygen. The ambulance had to wait a week at the border in Turkey for permission to cross into Syria. Once inside Syria, medical teams reported people crossing a river and carrying injured civilians. Within the hour the ambulance was hard at work ferrying the injured civilians to field hospitals.

While waiting at the border, Sakir also helped with aid convoys crossing the border into Syria. He witnessed the desperate living conditions for ordinary people and described what he saw “It’s dreadful, these people have nothing, you know they start queuing in the middle of the night. In the town of Hatay I saw people waiting all night for any delivery of aid that might come. They queue all night for bread, so the children have something to eat in the morning. While they queue they can see the flash of the shells falling nearby. They queue to get anything they can for their families”. (Photos enclosed)

Sakir also saw first hand the carnage of the war raging all around. He described the incident “Delivering aid one evening we saw shells falling  and smoke rising from a nearby village called  Reyhanli. One of the drivers knew this village so we waited for daylight and despite the danger we went there. There were dead people all over the place, parts of bodies, brains scattered, everything. Then we became grave diggers. The drivers recognised one of the dead and we took his body back to his home. It was terrible breaking the news to the family. Telling the family was hard, very hard”.

Sakir says “Just like everyone, I'd seen the television news of what was happening in Syria. I’m leaving the politics out of it. I just care about the ordinary people and I set out to do what I can myself. That's why I did what I could and took the ambulance there. When I handed it over and they told me it was getting used straight away I was overjoyed, and a bit tearful. To think that it could help the people wading across the river carrying their wounded straight away made it all worth while.

SECOND AMBULANCE TO SYRIA Sakir says “Now I've seen the reality of what's happening there. People who can hardly get anything to eat. People are getting killed or wounded. It's really upsetting. What if that was happening to my family, or to anyone here, I ask myself.

He goes on to say “I want to take another ambulance. I know it will really make a difference to the people over there. I want to take more medicine. And food for the people there. They’ve struggling to survive with death and destruction all around them”

Sakir and a small team of friends in Bristol raised money for his last trip by collecting donations from friends, family, mosques and charities. On the journey Sakir sleeps in the ambulance refusing to waste money on accommodation. The first trip cost £5,000 for the ambulance and the expense of the journey. Last Sunday (28th October) Sakir left Bristol for the second time enroute to Germany with £3000 to buy the next ambulance, hoping that fund-raising will continue to buy the extra equipment needed and to fund the trip to Syria.

This man who has felt the need to do something many of us would be afraid to do, describes himself as “ordinary”. Some of his friends in Bristol call him “Just do it” man! Making light of the thousands of miles he is driving, he described going to Syria as "only round the corner when compared to Gaza”.

Sakir supports himself and his family from a modest kebab business in the Fishponds are of Bristol. He is well known in Bristol for his personal humanitarian aid work. Following the attack on Gaza in the winter of 2008/2009 Sakir bought an ambulance on eBay and drove it to Gaza and donated it to a local hospital. Less than a year later he was at the wheel of a giant articulated lorry heading a convoy from Bristol with locally collected aid for the people of Gaza. In May 2010, Sakir and another Bristol man were onboard the Turkish aid ship, Mavi Marmara; as the ship was nearing Gaza they came within inches of death, when the ship was attacked by Israeli commandoes. In autumn 2011 he volunteered for the charity group IHH to distribute aid following an earthquake in Turkey.