Standing outside the Armenian Embassy in London, they held placards and chanted slogans, 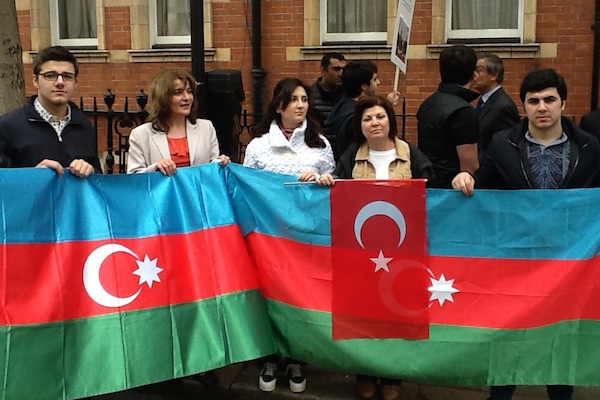 On 23 May, a group of over 40 Azerbaijanis and supporters of international law demonstrated their solidarity with two innocent civilians taken hostage on their own homeland of Kelbajar – a region of Azerbaijan that has remained under illegal Armenian occupation for more than 20 years. The European Azerbaijan Society (TEAS), the Azerbaijani community in the UK and the Federation of Turkish Associations UK, including Jale Ozer as representative chair, supported the protest.

Standing outside the Armenian Embassy in London, they held placards and chanted slogans, reminding bypassers that Nagorno-Karabakh remains Azerbaijani territory and demanding justice for Dilham Asgarov (aged 54) and Shahbaz Guliyev (aged 46 years). These two Azerbaijanis were taken prisoner by Armenian forces in June 2014 when visiting their relatives’ graves. A third man – Hasan Hasanov (aged 38) – was shot dead. In December, an unrecognised court sentenced Dilham to life imprisonment and Shahbaz to 22 years in jail.

Speaking to Azerbaijani television, Jack Pegoraro, UK Public Affairs Manager, TEAS, commented: “Dilham and Shahbaz were innocent civilians who returned to their ancient lands to tend the graves of their parents. It is their human right to do so, and the Armenians who are illegally occupying Azerbaijani territories have no right to prevent this, let alone illegally arrest and torture them and then claim they are military saboteurs. It is clear to anyone who has seen their pictures that these are old men, and not soldiers. Their arrest and subsequent trial in a kangaroo court goes against their human rights and is a clear violation of the Geneva Conventions.”

Most recently, the issue of the trial and imprisonment of the men was raised in Strasbourg at the Spring Session of the Parliamentary Assembly of the Council of Europe (PACE). The detention violates the European Convention on Human Rights, International Humanitarian Law, the UN Convention against Torture and Other Cruel, Inhuman or Degrading Treatment or Punishment and ignores Armenia’s commitment to ignore the obligations under the International Covenant on Civil and Political Rights. Victoria Nuland, Assistant US Secretary of State for European and Eurasian Affairs, has requested that these men should be immediately freed. Federica Mogherini, Vice-President, European Commission and High Representative of the EU for Foreign Affairs and Security Policy, condemned this as an unlawful act, given that they are civilians.

The arrest and ‘trial’ of these men clearly subverts the concept of international law. Armenia has occupied nearly 20 per cent of Azerbaijani territory for 20 years. Despite four UN Security Council resolutions being passed against the occupation, it continues to this day. The decision of the occupying Armenian forces to take Azerbaijanis as hostages on their own rightful homeland demonstrates Armenia’s continuing provocative stance.