50,000 call on Egypt to free jailed reporters as trial resumes 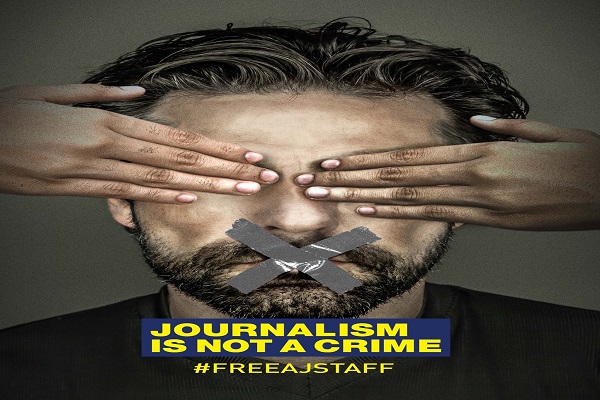 50,000 people from across the world have signed a petition calling on Egypt to free Al Jazeera journalists facing trial in Cairo. Three of the journalists - Mohammed Fahmy, Peter Greste and Baher Mohammed - are in court today.

Al Jazeera and Avaaz have joined forces to secure the release of the journalists, launching an international campaign calling on the Egyptian authorities to drop charges against the reporters, who deny any wrongdoing. The petition for their release can be viewed and signed here: http://avaaz.org/en/free_al_jazeera_staff_mena/?aje

The petition is the latest development in a high-profile campaign to free the journalists. Events were held in thirty countries last week as part of a Global Day of Action, while the hashtag #FreeAJStaff has been viral for weeks with people posting "selfies" while gagged.

Avaaz Campaign Director Sam Barratt said: “Because of the crackdown on press freedom in Egypt, these journalists could be locked up for nothing more than doing their job. If leaders in Cairo want to be treated as a legitimate government, they should start acting like one and listen to people from across the world who are calling on them to release these brave reporters.”

Abdullah Elshamy from Al Jazeera Arabic has been detained without charge since last August, while Al Jazeera English's Mohammed Fahmy, Peter Greste and Baher Mohamed were arrested on December 29th in Cairo on charges of “spreading false news” and having ties to the banned Muslim Brotherhood organisation. The arrests are widely seen as an attempt by the authorities to crack down on critical news coverage since the removal of Egypt’s first democratically elected president Mohamed Morsi by the country’s powerful military last summer.