Dolphins Misha and Tom released back to the wild, head home!

After 20 months of dedicated efforts by the Born Free Foundation rehabilitation team, Misha and Tom, two male bottlenose dolphins rescued from a small and infested swimming pool in Hisarönü, Turkey, have been released back to the wild. 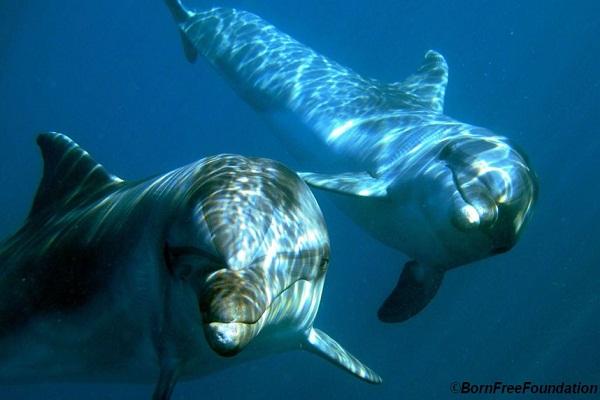 Such a historic project is the first in Turkey and it is hoped this success will provide a model of good practice that will be replicated around the world to release other dolphins from captivity.

Rescued by Born Free and Turkish, British and international members of the Dolphin Angels and Yunuslara Özgürlük Platformu (Freedom for Dolphins) in September 2010 the journey to freedom has been a long one. Misha and Tom were on the verge of death when rescued and despite the best efforts of the Born Free rehabilitation team they took a long time to recover full health.

A sea wind of change came in September 2011 when the family owned Global Sailing Academy in Karacasoğut offered a new and improved location for Misha and Tom, along with a supportive and caring environment for the rehabilitation team. Suddenly things were on the up and Misha and Tom came along in leaps and bounds. Their health improved enabling them to exercise more and build up their strength and stamina. They gained weight and built up strong and toned muscles.

The rehabilitation team applied techniques to move them away from the diet of dead fish they had become accustomed to during their seven long years in captivity. Using a variety of different methods Misha and Tom were soon foraging for, chasing and catching live fish; essential for their survival back in the wild.

And on Wednesday 9th May 2012 Misha and Tom showed that all the hard work had been worth it. As the wall of the sea pen was raised there was a moment’s hesitation, then Tom followed by Misha sped away and out of sight of the underwater cameras. Almost too quickly they had rounded the corner of the cove but not before breaching the water and with a flip of their tails; it was if they had said thank you and goodbye.

A spokesperson for the Dolphin Angels, Nichola Chapman said, “Tens of thousands of Dolphin Angels around the world campaigned tirelessly for Misha and Tom’s rescue and release. Thanks to Born Free and the dedication of the rehabilitation team we are delighted to have witnessed Misha and Tom swim away from a life sentence in captivity, to become ambassadors for dolphin freedom everywhere.”

However Misha and Tom are not being left to their own devises just yet! Tagged with satellite and radio equipment members of the rehabilitation team are following their movements and trying to keep up with them by boat in case they run into trouble.

The latter has proved a little hard to do as in less than 48 hours Misha and Tom have covered more than 100 miles. "It's unbelievable to see them travel this hard and fast," said Jeff Foster, a Seattle-based sea mammal expert who oversaw the dolphins' rehabilitation and preparation for release into the wild.

And, in an exciting twist to this fairy tale story; Misha and Tom’s route indicates they are heading home; back to the waters where they were originally captured so long ago and may possibly reunite with their family.  "The assumption is they're going back to the area that they were a pod in. They're definitely on a mission," Foster said.

The most pressing concern is how Misha and Tom will re adapt to an independent life back in the ocean. "There have only been a handful of reintroduction programmes with mixed results," Shirley Galligan, Born Free wrote. "Returning any captive wild animal to the wild is never without risk."

However initial sightings are positive. Within hours, the Born Free team photographed Misha flipping large local fish called mullet out of the water. And then, they witnessed strange behaviour from a dolphin rolling on the surface. It took some time to identify the animal by its dorsal fin.

"It was totally completely different dolphin!" Foster said. "A single dolphin was interacting with Misha; within the first four or five hours after we let them out, they were pursuing fish and interacting with wild dolphins. It was everything and more than we expected."

While these initial activities are very encouraging Born Free remains cautious. There is still a way to go before we know 100 per cent that Tom and Misha have re-adapted fully to life back in the wild.

Born Free is calling for an international ban on the capture of wild dolphins and hopes that the rehabilitation of Misha and Tom will provide a template for future dolphin release projects that will, one day, lead to the end of dolphins in captivity – as has been the case in the UK since 1991.