The vile and disgusting film by Israeli filmmaker Sam Bacile, produced in the United States which depicts the Holy Prophet Muhammad (PBUH) in a derogatory way. 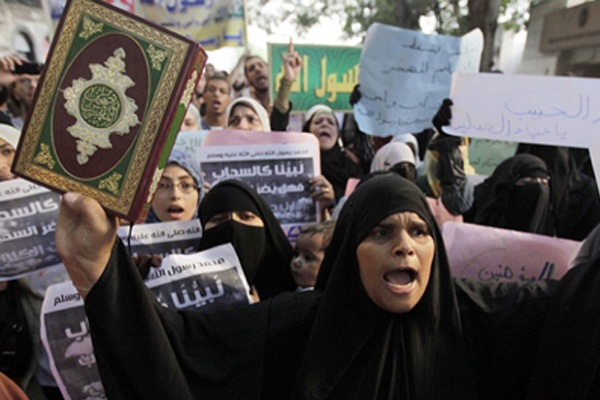 Protesters angered over a film that ridiculed Islam's Prophet Muhammad fired gunshots and burned down the U.S. consulate in the eastern Libyan city of Benghazi, killing one American official, witnesses and the State Department said. In Egypt, protesters scaled the walls of the U.S. embassy in Cairo and replaced an American flag with an Islamic banner.

Mr. Mohammed Shafiq, Chief Executive of the Ramadhan Foundation comments: “I wish to condemn with reservation the vile and disgusting film by Israeli filmmaker Sam Bacile, produced in the United States which depicts the Holy Prophet Muhammad (PBUH) in a derogatory way.  The only intention of this evil man is to cause harm to the hearts of Muslims and create more friction amongst our diverse communities.  Islam is ready to be challenged and questioned but to do it in such a way suggests their real intentions are to promote division and harm Muslims.

As Muslims we believe derogatory comments or depictions of any faith or its symbols is unacceptable and in particular in Islam it is totally forbidden to depict our Holy Prophet Muhammad  in this way.  What concerns me more is that this man funded his film of $5 million from Jewish donors, at a time when there is mistrust between our communities surely we should all be working together to understand and respect each other’s faith.  We call on the Jewish community to condemn this film and those that have donated to it.  We urge the United States Government to consider banning this film as it is promoting incitement to religious hatred.  Sam Bacile has said Islam is a cancer, that to me is not an intellectual response to Islam but one of a man full of hatred.

I also wish to condemn the killing of the US Ambassador in Benghazi yesterday and the violence in Egypt, whilst we Muslims are hurting and disgusted at his film we must maintain peaceful protest and ensure we channel our anger towards those that have done such actions.

To those that say Muslims want to restrict freedom of speech, our reaction is quite simple: with freedom of speech comes responsibility and a need to respect, this film fails to do that and that’s why it should be banned.  We call on YouTube to do the decent thing and remove this film from its site immediately and we call on Muslims to contact the website to register their complaint.

I urge the Muslim world to remain calm and peaceful and we stand ready to engage the US Government on why this sort of film is unacceptable.”