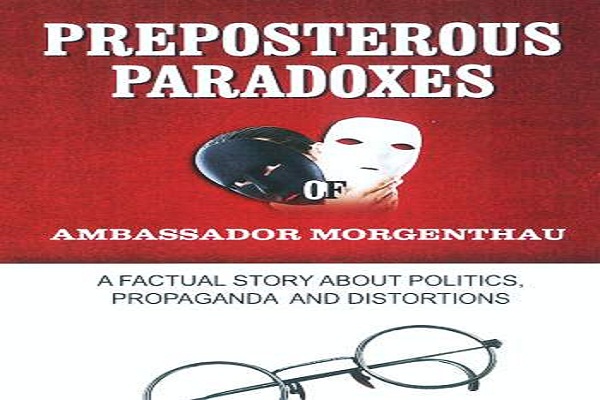 Sukru Server Aya's new book titled "Preposterous Paradoxes of Ambassador Morgenthau: A Factual Story About Politics, Propaganda and Distortions" is expected to be released in February 1913.

The book titled “Ambassador Morgenthau’s Story” written by Mr. Henry Morgenthau Sr. the U.S. Ambassador in Istanbul from 1913 to 1916, on which the Armenian allegations mainly based on, when cross checked day by day with his diary, reveals the fact that it is tailored rather than conveying the real truth on what happened during this era.

Ambassador Henry Morgenthau, during his 780 days of diplomatic mission in Istanbul, did not even travel ten miles out of the city to any countryside village, except a few on the Bosporus and the Belgrade Forest where he and his friends frequently went horse riding. The only trip he took was by ship to Greece and Egypt in March 1914 and from there to Palestine Holy Lands and cities, ending in Beirut. . .

From there he boarded his assigned yacht – (gun boat) Scorpion to travel to Mersin, Adana, Rhodes, Smyrna and finally Istanbul in 40 days. It was like a cruise holiday and he never rode on a horse or a car on the soil of Ottoman Empire. He did not travel eastbound, never went further than 10 miles east of Skudari (Üsküdar) and did not visit the eastern regions of Anatolia.

His book titled “Ambassador Morgenthau’s Story” is based solely on what he heard and was told. These kinds of evidences or depositions are called “Hear to say” and not taken into consideration or credited in the courts of justices.

It is obvious that the stories in the book are fictious, rather than the reality, actually came into life in the minds of Mr. Arshag Schimavonian, the dragoman (interpreter) of the USA Embassy in Istanbul who acted as the Ambassador Morgenthau’s advisor and right hand together with his secretary Mr. Hagop Andonian who both were anti-Turkish Armenians. Their made up stories ingeniously converted to a novel style history book by Mr. Burton J. Hendrick, a Pulitzer Prize winner, who actually is the ghost writer of the book. He did write the book using all his skills.

Pulitzer Prize winner Mr. Hendrick, by magically “putting words in their mouths” of the story tellers as if there was a sound recorder and the conversations were put down verbatim years later in the book, made a fortune out of this tell-a-tale book, by receiving forty percent of the revenues from the sales and a mere $15,000 in cash, equivalent of $1,263,823 of the year 2012. Dressings were all produced in the USA to make the story look real either by Hendrick himself or Schimavonian and Andonian.

The main reason why the book titled “Ambassador Morgenthau’s Story” published was to write a book damning the Turks and the Germans, which would justify the USA’s entrance in the war. It was the idea of Ambassador Morgenthau and he made his offer to President Wilson, whom he was very close to. USA and Britain knew that this was an “Ordered book to serve as a trump card” for USA to participate in WW I.

President Wilson supported the idea and a new team was set up for his alleged services in Turkey to be explained in his reputed book. The team leaders were Mr. Arshag Schimavonian and Mr. Hagop Andonian. Although the author of the book is declared to be the Ambassador Henry Morgenthau, it is by now known by everybody that the actual writer was Mr. Burton J. Hendrick and he considered Morgenthau’s, Schimavonian’s and Andonian’s stories as reliable sources.

I used word “notorious” deliberatively, because the output of this cross check reveals the fact that Mr. Ambassador’s book was tailored rather than conveying the real truth on what happened before, during and after deportation on the year 1915.

The book is a continuation of the chapter 15 of Armenians-1915.blogspot.com/2010/12/3189-genocide-of-truth-continues-but.html which can be read and downloaded at the given link

For more remarks by Aya on Morgenthau see also Armenians-1915.blogspot.com/2010/08/3121-morgenthau-book-review-by-sukru.html

This last book of about 240 pages, elaborates deeper and demonstrates the distortions and inversions by Ambassador Morgenthau. It compares verbatim excerpts from his book “Ambassador Morgenthau’s Story”, with what he had written on the very same matter in his personal diary kept by him and/or his secretary Hagop Andonian daily, noting the important events. Where necessary, other “neutral documents” are quoted to show that Morgenthau’s Book, is an "excellent book of boasting, diversions and inexplicable lies" he introduced in 1918 by this book (almost four years after the events happened) to create a document damning Turks and Germans, to give “a humane cause” to USA to take part in WW1. Mr. Morgenthau’s Diary written in his hand writing (or his secretary’s) belies the polished words written in his book (by the Pulitzer prize winner ghost writer Burton Hendrick, putting words in mouths as if they were copied from a sound recorder).