AVA, The trend mirrors the rise of nationalists in other parts of southern Europe hardest hit by an economic slump, soaring unemployment and falling living standards. 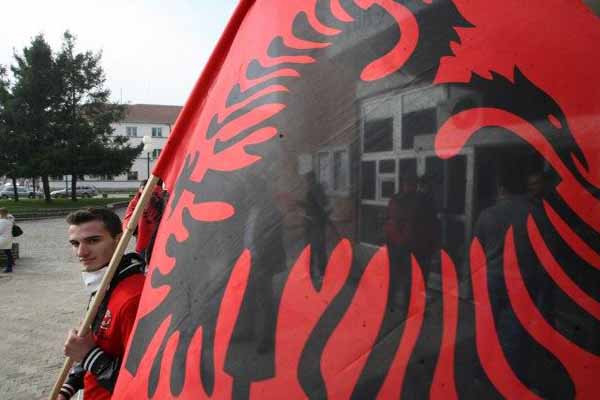 The walls of Kreshnik Spahiu's office in the Albanian capital bear the names of towns far beyond the borders of this Adriatic state, in modern-day Greece, Macedonia, Montenegro and Serbia. Albanians regard the settlements as their own, dating from when the Balkans marked the western reaches of the sprawling Ottoman Empire. Some are still home to Albanians, restive minorities in the 100 years since the borders of today's Albania were set by the Great Powers in London. A century on, Spahiu says they should be united, and the nationalist rallying call of his Red and Black Alliance political party is resonating among impoverished Albanians ahead of a parliamentary election in the NATO member state in June. The trend mirrors the rise of nationalists in other parts of southern Europe hardest hit by an economic slump, soaring unemployment and falling living standards.

Some polls put Spahiu's party third in the June 23 election, and he could emerge as a kingmaker, swaying policy in any future government.

"If Albanians want to live tomorrow with the Greeks, Serbs, Italians, Spaniards and the Portuguese (in the European Union), what's stopping them from removing the borders between themselves?" Spahiu, a former district court judge, said in an interview with Reuters.

Diplomats say the fiery rhetoric is far from helpful as the EU tries to coax Serbia and its former Kosovo province - where Albanians are the majority - towards a delicate rapprochement and to cement a fragile calm in Macedonia, which flirted with civil war in 2001.

Spahiu's strain of hardline nationalism was once confined to the margins, but a sense of national awakening has sharpened with the 100th anniversary of Albanian independence last year and a 2008 declaration of independence by Kosovo.

Spahiu's success has dragged mainstream leaders to the right, including Prime Minister Sali Berisha, as the close-run election draws near.

Marking the 100th anniversary of independence, Berisha referred to towns in Macedonia, Greece, Serbia and Montenegro as "Albanian lands".

In January, he hailed fallen Albanian fighters in Serbia as "heroes of the Albanian nation."

Then in February, in a Munich speech railing against "Albanophobia", Berisha rejected the idea that Albanians could be regarded as five different nations because they live in five different Balkan states.

"Albanians cannot accept this," he said. "The national unity of the Albanians will be the alternative to this."

Ethnic Albanians laid down arms in Macedonia and southern Serbia's Presevo Valley in 2001 on the promise of better lives inside NATO and the EU. But progress has been painstakingly slow, and they remain far from satisfied with their lot.

Albania's NATO allies and the European Union that it wants to join are making their displeasure known, in unusually blunt terms.

"Is nationalism in a form we hear it from Tirana really based on Euro-Atlantic values?" Stefan Fule, the EU commissioner tasked with steering the countries of the Western Balkans towards membership of the bloc, tweeted last month.

His remark followed an unusually blunt intervention by the United States, a close ally of Albania and Kosovo, in a State Department memo to the Albanian Foreign Ministry in February that was leaked to media.

It told Tirana to "stay out of the affairs of Serbia" and warned that nationalist rhetoric could "erode peace and stability".

Berisha has denied that Albanian nationalism poses any threat.

Some analysts put it down to pure electioneering, with the June vote expected to be a close-run affair and Berisha and his rivals trying to harness the discontent of Albanians struggling with the fallout from Europe's debt crisis.

Albania was a closed Stalinist dictatorship from World War Two until 1990, but enjoyed enviable rates of economic growth from the turn of the century until the crisis broke in Europe's single currency bloc, cutting into remittances from some 1 million Albanian migrants in Italy and Greece.

The Albanian economy grew a relatively meagre 1.6 percent in 2012, its lowest level in 16 years.

Albania's bid to join the EU has faltered due to the country's deep polarisation between its two traditional parties, Berisha's Democrats and the opposition Socialists.

Their inability to get along has slowed reforms, and occasionally boiled over into violence.

If the polls are correct and Spahiu's party - which takes its name from the the colours of the Albanian national flag - comes third, he could have the casting vote in deciding who rules. That would put the next government in an awkward spot given the Red and Black Alliance's demand for a referendum on uniting Albania and Kosovo.

Spahiu's slogans and straight-talking has struck a chord with Albanians frustrated with the two biggest parties that have dominated government since the collapse of communism, with mixed results.

"If he's in government, I'm sure no police officer would take a bribe and spend it on beer," said 20-year-old Xhevit Sula, at a rally addressed by Spahiu in the southeastern town of Korce.

Despite a diploma as a construction technician, Sula said he had struggled to find work over the past couple of years, with the construction sector in decline.

Critics, however, says Spahiu's nationalism shares the ugly, xenophobic agenda of other right-wing groups such as the anti-immigration Golden Dawn in Greece, which has witnessed a surge in support from Greeks angry at years of brutal austerity and recession.