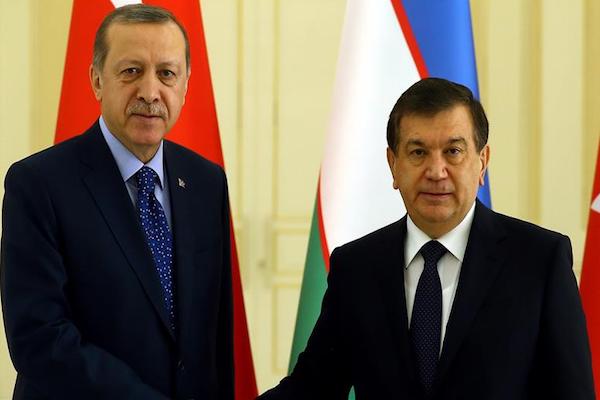 President Recep Tayyip Erdogan said on Friday ties between Turkey and Uzbekistan should be developed after the Central Asian country’s presidential election to be held on Dec. 4."In this new period, we must work to improve our relations in all areas," Erdogan said during a meeting with Uzbekistan's acting President Shavkat Mirziyoyev in Samarkand.Uzbekistan’s Dec. 4 poll follows the death of former ruler Islam Karimov in September. Karimov had run the country for 27 years.

Mirziyoyev will run in the election for Liberal Democratic Party which the late Karimov had represented.

Erdogan said, following the Uzbekistan election the first official visits at presidential level should be between Ankara and Tashkent.

He described Uzbekistan as a guarantee of the region’s stability due to its deep-rooted state tradition, historical heritage and strategic position.

"I believe you will maintain Uzbekistan's political stability and economic development… I wish success to you for the Dec. 4 election," he added.

Mirziyoyev said Turkey had been the first country to recognize Uzbekistan's independence and had provided great support.

"We will never forget this. (...) Turkey is a prestigious country and has great opportunities in the world. You are a leader who has a big life and political experience. Your eternal love and efforts for the Turkish people amaze me, like most people, and it is a lesson for us," he added.

Mirziyoyev added that Uzbekistan’s aim was to improve relations based on equal rights and mutual respect and to turn a new page in cooperation between the two countries.