Israelis and Palestinians held a third round of negotiations in Jerusalem on Tuesday and Israel's chief representative at the talks predicted the U.S. 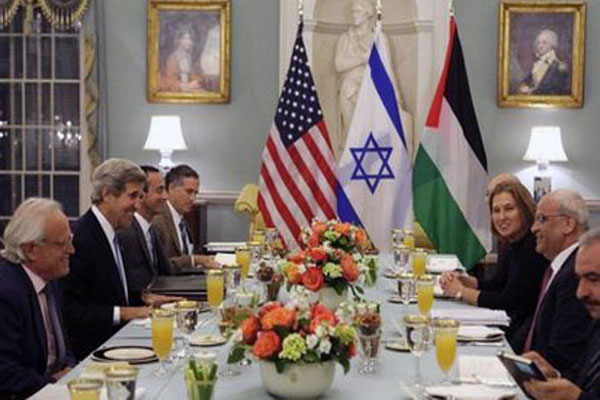 Tzipi Livni coupled her forecast with acknowledgement that at least one partner in Israel's right-wing coalition opposed the goal set by Washington to create a Palestinian state alongside a secure Israel. Livni, speaking on Israel Radio before talks convened in Jerusalem, said "there will be dramatic decisions" by Israel at the end of the negotiating process. She said that in the meantime, both sides had agreed not to disclose details about their deliberations to build trust. The negotiations were renewed last month in Washington after a three-year standoff over Israeli settlement expansion in the West Bank and East Jerusalem, areas captured in the 1967 Middle East war that Palestinians wants for a state along with the Gaza Strip. A second round of talks was held at an undisclosed location in Jerusalem on Aug. 14, despite Palestinian consternation over Israel's approval in the run-up to the meeting of plans for 3,100 new homes for settlers.

An Israeli statement issued after Tuesday's negotiations said that "both sides parted agreeing the meeting has been serious, and that they will continue the talks at a near date."

"It is no secret that there is at least one party (in the Israeli government) that sees negotiations as wrong, that opposes two states for two peoples," Livni said, referring to the pro-settler Jewish Home faction.

She called on the main opposition Labour Party to "lend its support now" to the government's efforts, suggesting such political backing could help achieve a land-for-peace deal.