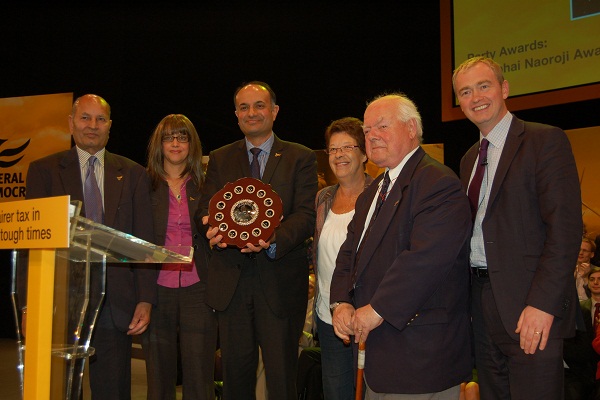 The award, which was open to several hundred local party groups across England, Scotland and Wales, was presented to the local party that best demonstrated a record of achievement in promoting diversity through ethnic minority representation across its political ranks. Chair of Leicester City Liberal Democrats, Parmjit Singh Gill, a former city councillor and MP, said:

"It's a fantastic achievement not just for Leicester Liberal Democrats but also for the city, reflecting the strength of diversity that exists in its many quarters. Leicester is recognised as the multi-cultural capital of the UK and is also host to the largest Indian community outside of London. Its diversity credentials were a significant factor in the Queen deciding to commence her Jubilee tour from this home of diversity with communities that have roots from all over the world, living harmoniously and setting an example for other places to follow."

In 2004 the world's media was focussed on the Leicester South by-election, which was referred to internationally as the referendum on the war against Iraq. A war which the Liberal Democrats opposed. Voters made clear to Tony Blair's Labour government that they were whole-heartedly against its illegal invasion by electing Parmjit Singh Gill who defeated the Labour candidate in a seat previously held by the socialists.

Singh Gill said: "It was a huge privilege getting elected as an MP for the City and following in the footsteps of Naoroji after 112 years. Naoroji was elected as a Liberal in Finsbury Central in 1892 and it's a great honour to be receiving this prestigious award in his memory."

He added: "It is the first time the award has been presented in commemoration of Naoroji's historic achievements of which there were many. In India he laid the foundations of the Indian National Congress and was elected President of the Congress in 1886. He travelled to Britain to become the first British Asian Member of Parliament at the grand old age of 67, serving until 1895. Both Mahatma Gandhi and Muhammad Ali Jinnah, who went on to become the founders of modern India and Pakistan, were advised and guided by him. They also both played an active role in his election campaign. Florence Nightingale, who supported the cause of Indian freedom, also wrote letters of encouragement to him at the time."

Naoroji's election victory was a significant political statement that only in Britain, with its profound sense of fairness, could there be an opportunity in the nineteenth century for an Indian to be elected to the British Parliament.