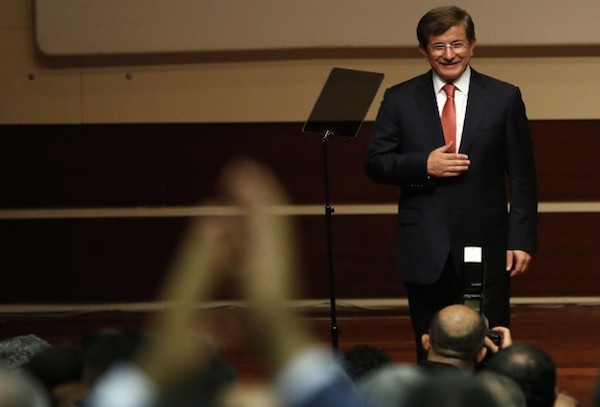 Turkey's Prime Minister-in-waiting Ahmet Davutoglu hailed the ruling Justice and Development (AK) Party as the "epitome of the people of Turkey" in his final speech before taking office.
Davutoglu was speaking at a party congress on Wednesday before being elevated to chairman of the party and, ultimately, prime minister, both roles he inherits from president-elect Recep Tayyip Erdogan. The foreign minister said he would continue on the path set out by Erdogan when he accedes to the premiership and vowed to fight the "parallel structure" that has been the party’s bogeyman in recent months. Referring to the corruption allegations that have surrounded Erdogan’s inner circle and are said to be the work of supporters of U.S.-based cleric Fethullah Gulen, Davutoglu said: "They tried to destroy the 12 years of trust that we built in our people's minds, but failed."
Davutoglu also promised that no citizen would be left out during his leadership and that "equal citizenship principles" would be pursued. The former academic also addressed the thorny issue of negotiations with outlawed Kurdistan Workers’ Party, or PKK. He said: "We will not get a wink of sleep until the solution process will be completed with success."
The "solution process" began early last year with a cease-fire between the Turkish government and the PKK.
Davutoglu was confirmed as chairman by delegates of the party, known as the AK Party, after his speech. Erdogan will appoint him as prime minister on Thursday to form Turkey's 62nd cabinet.
A total of 1,245 delegates declared their nominations, all voting for Davutoglu.
Echoing Erdogan’s comments to the congress earlier in the day, Davutoglu said it was not a "goodbye" ceremony but a congress to show the people's support for Erdogan’s vision.
"We are in a dream of building the new Turkey," he said. "Those who don't fight for this dream should be ashamed of themselves."
Erdogan will officially step down as prime minister on Thursday in favor of Davutoglu and will then be sworn in as Turkey's 12th president.