Police seal off Gezi Park ahead of alternative iftar event 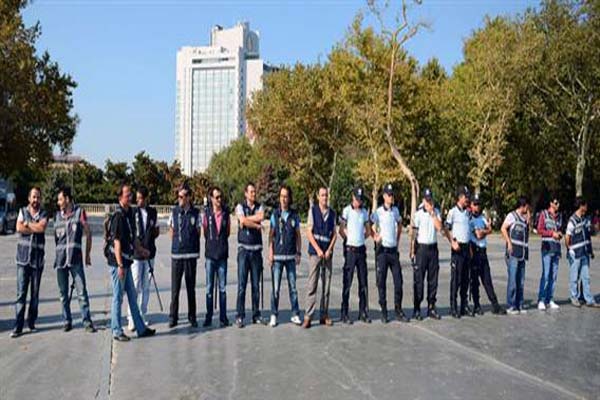 Peace and Democracy Party's (BDP) Istanbul deputies Sabahat Tuncel and Sırrı Süreyya Önder had also been expected to attend the event, part of the "traveling" iftar meals that are being organized in a different public space every day. After evacuating the park, police started to cordon off Taksim Square in an attempt to restrict a group that had gathered at the entry of the park. At least three people have been detained, while some of the security officers sprayed tear gas at individuals who refused to leave the square, daily Hürriyet reported. Tuncel and independent deputy Levent Tüzel started a sit-in to protest the closure of the park. After being unable to convince the officers, they prepared a small dining table on the floor at the juncture between the pedestrian İstiklal Avenue and Taksim Square, despite being surrounded police officers.  "The organizers of the 'earth iftar' [at Gezi Park] had invited us and we wanted to participate. But the police didn't allow us to. This has no legal justification. It is a political decision," Tüzel told reporters.

For her part, Tuncel said that Istanbul Gov. Hüseyin Avni Mutlu has refused their request talk with them on the matter. “That’s their attitude since the start of the Gezi resistance. People are here for the fast-breaking, that’s all,” she said.

Those who came for the iftar meal prepared a long table along the İstiklal street, like during the first day of Ramadan.

Meanwhile, officers have also removed a symbolic memorial cemetery that had been placed by the Gezi protesters to commemorate the four demonstrators and a police officer who died during the demonstrations that were sparked two months ago.

Police then violently evacuated the park after protesters had occupied it for over a week. The park was subsequently sealed off for more than three weeks until the beginning of Ramadan on July 8.