Castro denies caved in to US pressure on Snowden

Russian daily Kommersant reported that Cuba, under pressure from the US, would have denied landing to a Moscow-Havana flight if Snowden were on board. 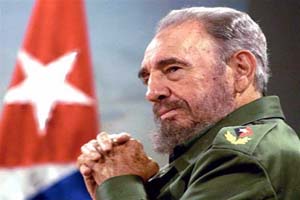 Fidel Castro, the former leader of Cuba, has denied Russian media reports that US fugitive intelligence contractor Edward Snowden stayed in Russia rather than fly to Havana because Cuba succumbed to US pressure to deny him entry.

“I admire the courage and justice of Snowden’s statements with which he, in my opinion, provided a service to the world,” Castro wrote in an article published Wednesday night on Cuban internet portal Cubadebate. “What I do not agree with is that anyone, regardless of his credentials, spoke on behalf of Cuba.”

The Russian daily Kommersant reported Monday, citing sources, that Cuba, under pressure from the US, would have denied landing to a Moscow-Havana flight if Snowden were on board.

Dismissing the report as a “lie,” Castro went on to say that the US “always tries to pressure the United Nations, other governments and private organizations around the world.” Cuba, he said, having resisted America for 54 years, remains ready to resist “as long as it takes.”

Snowden, a former contractor for the US National Security Agency (NSA), is wanted by the United States on espionage and other charges after he gave journalists classified documents detailing the NSA’s far-reaching electronic and telephone surveillance programs.

Snowden flew to Russia from Hong Kong on June 23. There was speculation he would continue on to Cuba after reports claimed that a seat on a Moscow flight to Havana was reserved in his name, but Snowden never boarded the flight.

He was granted temporary asylum in Russia in early August, despite repeated demands from Washington for Moscow to return him to the US.