Melisa, one of the UK’s best bellydancers, was the centre of attention during her three performances at the ‘Istambul Agora’ festival in Sao Paolo last week. 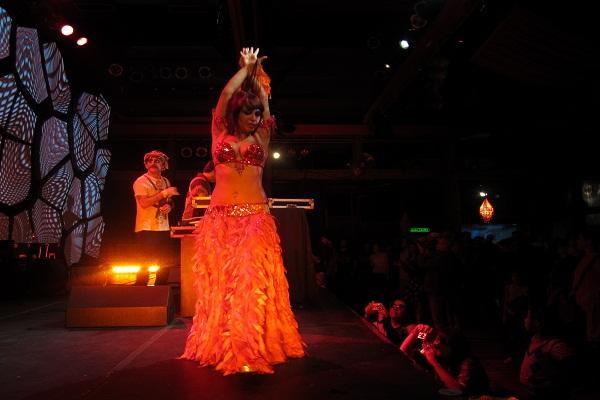 With bellydancing growing in popularity across Brazil, Melisa Yavas’s workshop on 19th April was packed to capacity with 25 people attending. They were given expert tuition in Oriental moves and techniques, which they put together in a simple dance routine.

A few days later, Melisa Yavas stole the show when she performed with nu-jazz superstar Ilhan Ersahin and his Istanbul Sessions band that also featured special guest, gifted Brazilian trumpet player Guizado. Over 700 people attended this sell-out concert at Sesc Pompéia, where Melisa provided the dance interpretations to Ersahin’s blend of modal funk-cum-whirling dervish dub. Her delightful routines earnt Melisa an encore, as both audience and musicians demanded she returned to the stage to dance on.

Originally from Izmir and based in London since 1999, stunning Oriental dancer Melisa brought grace, passion and drama to the musical proceedings at the festival’s closing party, a Turkish clubbing extravaganza that oozed of Bosphorus vibes in the heart of the Sao Paolo. Brazilian clubbers were shown how to shake their shoulders and hips to Turkish club beats thrown down by DJs Baris K and Ipek Ipekcioglu, while Melisa picked up basic Samba steps.

Melisa Yavas said, “I had a wonderful time in Brazil. The people love to dance and they showed great aptitude for bellydancing. I fell in love with their culture too – their food was so tasty and their hospitality so warm. It would be great to visit again.” She added, “Istambul Agora was not just a great performing experience for me. I was also able to see many brilliant Turkish artists live, such as Aynur Dogan, Erkan Ogur, and Baba Zula, while Sufi dancer Ziya Azazi’s whirling dervish performance was simply breathtaking”.