Red tomatoes to a train on the Underground approaching a platform symbolising the meeting of two lovers. 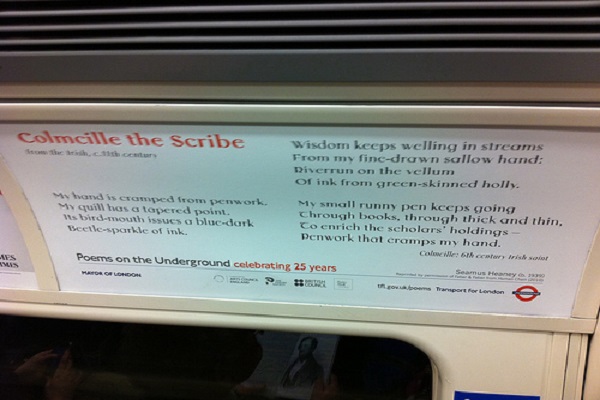 The poems in the latest collection evoke a range of London places and sights as imagined by the poets - from beautiful buses that look like red tomatoes to a train on the Underground approaching a platform symbolising the meeting of two lovers.

The collection of six poems that can be seen across the capital includes old and new poems which span beyond the 150 years of the world’s first underground railway. The earliest verse from the first part of the 19th century is from Jerusalem by William Blake which is about the poet’s vision of Islington and Marylebone, Kentish Town and St. Pancras transformed into a new Jerusalem.

A twenty-first-century poem, Moment in a Peace March by the Ghanaian-born poet Grace Nichols presents an equally visionary image of one of London’s great peace marches, with “a holy multitude pouring / through the gates of Hyde Park”.

Other familiar scenes include a nostalgic memory of cricket at Lord’s in At Lord’s by Francis Thompson; an old man in Rotherhithe enjoying the breeze from the Thames in The Conversation of Old Men by Thom Gunn; bright red buses in central London in Buses in the Strand by R.P. Lister; and a Tube train nearing a station in Our Meetings by London-born poet Andrew Waterman.

Judith Chernaik, writer and founder of Poems in the Underground, said: “London life and its pulsing transport network have often inspired our greatest poets. I hope both commuters and tourists will enjoy this latest set of poems.”