Numberless Islands is a new solo exhibition by David Heathcote 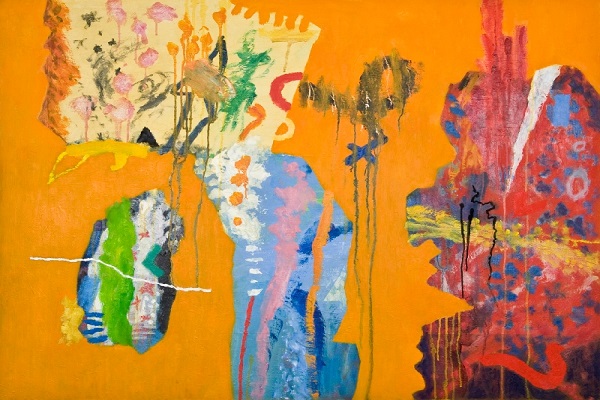 In addition to works from Heathcote’s broad career, the exhibition will show new abstract landscapes.

An illustrated catalogue, containing an essay with interview extracts, will accompany the show, together with Heathcote’s film, Hausa Art in Northern Nigeria (1978, 20 mins).

Forever ebbing and flowing between past and present, and charted and uncharted places, time is not linear in Heathcote’s paintings; different moments, musings and embedded feelings are seamlessly omnipresent. Only occasionally do the titles of his works fundamentally situate the scene, for example, as Sahel, or Naples. Usually, places emerge in his mind as a fusion of environments — as gardens, deltas or the geographical sum of walks and journeys.

Taken from the WB Yeats poem, The White Birds (1892), the line “I am haunted by numberless islands, and many a Danaan shore, Where time would surely forget us, and Sorrow come near us no more” evokes imaginative escapism, freedom from constraints and timelessness. The Danaan shore, or Tier-nan-Oge, of Irish folklore, is an imaginary land of everlasting youth and joy — and thus, for Yeats, a metaphor for eternal and unconditional love, unbound by circumstance. The allusive seagulls “buoyed out on the foam of the sea” personify a freedom from the march of time, geographical frontiers and human sorrow. Heathcote’s Numberless Islands relays this sense of the atemporal and metaphysical, as his paintings are conceived through the inward vision of memory and imagination alone. A multitude of colours, textures and gestures are variously conceived through subconscious thought: these synaesthetic fragments are ‘cognitive short-cuts’ to his travels in Africa and beyond, and to resurfacing feelings and poetic imaginings. Just as recalling the rhythms and patterns of African art has (obliquely) influenced his mark-making and colours, Western poetry has stirred Heathcote’s imaginings of foreign lands.