GAU Karpasia Life Campus has taken a long time to plan and today we saw the button of progress pushed and witnessed the first of many concrete foundations being pumped into place. 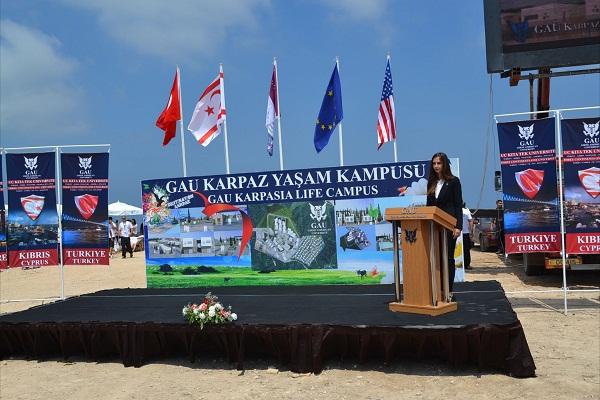 It’s a long but fast drive these days to Dipkarpaz and one I was delighted to make to see an exciting future unfolding.

It’s a long but fast drive these days to Dipkarpaz and one I was delighted to make to see an exciting future unfolding.

On Tuesday 8th May on the outskirts of Dipkarpaz, Ali Yaliman, Chief Editor of Cyprus Weekly Observer and I arrived to witness the official start of construction of the GAU Karpasia Life Campus.

GAU Karpasia Life Campus has taken a long time to plan and today we saw the button of progress pushed and witnessed the first of many concrete foundations being pumped into place.

Girne American University (GAU) had taken the first step for their new campus in Dipkarpaz with the signing of the protocol which enables GAU to rent land around Dipkarpaz village for this project. This protocol was signed by Prime Minister Irsen Kucuk, the Minister of Interior and Local Administrations, Nazım Cavusoğlu; the Minister of Finance, Ersin Tatar; the Minister of National Education Youth and Sport, Kemal Dürüst and the Founding Rector and Chairman of GAU’s Administrative Board, Serhat Akpınar.

Following the opening of inter-continental campuses in England, Singapore, USA and their first educational building in Turkey a few weeks ago, Girne American University has made a statement concerning the Karpaz Life Campus, their second campus in TRNC.

It was stated by GAU that together with the classic campus structure, the campus that is being built will have a different status with its natural lakes and social life. An information centre, Archaeological and Nature Museum, Eco village, health centre, sports centre, accommodation units, AR-GE centre promoting agriculture and stockbreeding and theatre and cinemas will all be built with special architectural techniques that will protect the natural environment. The health centre and the social and cultural centres within the campus will be giving service to the local population 24 hours a day.

Karpaz will gain its first Life Campus together with a museum, theatre, and cinema, cultural and social centres. At the first stage, GAU Karpaz Campus will serve 500 students with an English Foundation School, Tourism Department, and various institutes of nature and the environment.

Eco-Village and Environment Institutes will be Established

Emphasizing that the eco-village and research institutes will not harm the natural environment but instead will examine the texture of the area to enrich the natural life, it was stated that the potential views have been discussed by specialists during the academic year. Karpaz Life Campus is to be the centre of GAU’s scientific studies which will enhance the Karpaz peninsula’s nature, culture and economy

The Region Will Change With The GAU Karpaz Life Campus

NATIONAL TOURISM  WILL BE INTRODUCED TO THE WORLD WITH KARPAZ LIFE CAMPUS WHICH IS NOT ONLY A SCIENTIFIC BASE BUT WILL ALSO BE THE CENTRE FOR INTERNATIONAL AND EUROPEAN UNION TOURISM EDUCATION ASSOCIATION’S RESEARCH CENTER.

Speaking on the subject a GAU spokesperson emphasised that along with TRNC Economy, Higher Education and Tourism the socio-economic, cultural and natural heritage of Karpaz will all be enhanced.

“A new era in Tourism Education”

The Karpaz Life campus building will begin to be established as one which is compatible with and upholds the culture and sustainable natural environment of the Karpaz area stated Asst. Prof. Ismet Esenyel the President of the Karpas Campus Life Eco-Environmental Research and Development Centre (INTEB ECO - R & D). The project has been undertaken with the help and support of the high authorities of Turkey and TRNC Council of Ministers. The centre will contribute to the socio-economic development as well as Tourism Nature Park within the European Union Literature in addition to Dipkarpaz villages and the region to implement Eco-Agro tourism potentials. This will begin a new era in tourism education and Higher Education.

GAU INTEB spokesperson specified that the newly formed Gastrology division, will contribute especially to the growth and production of organic vegetables and fruit in this region. With this opportunity it will be possible to conduct scientific research on Cypriot cuisine, French cuisine and Ottoman cuisine and the other Middle Eastern cuisines within the geography under the Culinary Arts and Gastronomy science. It was expressed that student and faculty exchange programs will be started between most elite universities in this field forming a Restaurant School firstly at Kyrenia, then at the Istanbul campus followed by Karpaz.

Vice president of the GAU INTEB Emete Torus expressed that the opening of the GAU Karpas Life Campus and Eco-Environment Research and Development Centre (INTEB ECO - ARGE) will trigger international activity in the socio-economic and cultural tourism of Karpaz. She continued by expressing her thanks to “the Dipkarpaz Municipality and local people for their support and contributions for the realization for the project as a sustainable tourism potential, the unspoilt nature of the region, traditional village life, rich rural and eco tourism potential characteristics of the area makes it an internationally attractive centre”.

So my day out up the Karpaz with the “Governor” came to an end but the realization that the TRNC is changing and it can clearly be seen through advances in education and the benefit that this will bring, will be felt in the Karpaz and throughout North Cyprus and perhaps, even the world.