The full story penned by Editor in Chief Ali Yalıman and Deputy Editor Coln Mulcahy, our reporters of “AVA” in Girne. 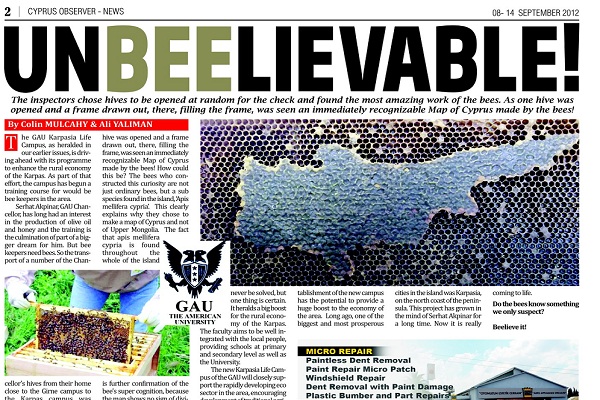 Weekly Cyprus Observer’s full page cover story on Saturday September 8th attracted great interest and attention from the readers. Here is the full story penned by Editor in Chief Ali Yalıman and Deputy Editor Coln Mulcahy, our reporters of “AVA” in Girne. The inspectors chose hives to be opened at random for the check and found the most amazing work of the bees. As one hive was opened and a frame drawn out, there, filling the frame, was seen an immediately recognisable “Map of Cyprus” made by the bees!

The GAU Karpasia Life Campus, as heralded in our earlier issues, is driving ahead with its programme to enhance the rural economy of the Karpas. As part of that effort, the campus has begun a training course for would be bee keepers in the area. Serhat Akpinar, GAU Chancellor, has long had an interest in the production of olive oil and honey and the training is the culmination of part of a bigger dream for him. But bee keepers need bees.

So the transport of a number of the Chancellor's hives from their home close to the Girne campus to the Karpas campus was arranged.

At the same time the Ministry of Agriculture was undertaking a survey of bee colonies and testing the product against various parameters; colour, taste, viscosity etc. As part of this a team arrived at the GAU Karpsia campus last Wednesday to carry out a random check on the bees.

The inspectors chose hives to be opened at random for the check and found the most amazing work of the bees. As one hive was opened and a frame drawn out, there, filling the frame, was seen an immediately recognisable Map of Cyprus made by the bees!

How could this bee? The bees who constructed this curiousity are not just ordinary bees, but a sub species found in the island, Apis mellifera cypria.  This clearly explains why they chose to make a map of Cyprus and not of Upper Mongolia.

The fact that apis mellifera cypria is found throughout the whole of the island is further confirmation of the bee's super cognition, because the map shows no sign of division between the north and south of the island. Could this be an omen for the future?

There is an old English custom. When people had problems or troubles they would go out to the hives and “tell it to the bees”. Country folk reckoned that telling the bees would take the burden from troubled shoulders. Maybe, this time, the clever little apis mellifera cypria is trying to tell us something?

Maybe this mystery will never be solved, but one thing is certain. It heralds a big boost for the rural economy of the Karpas. The faculty aims to be well integrated with the local people, providing schools at primary and secondary level as well as the University.

The new Karpasia Life Campus of the GAU will closely support the rapidly developing eco sector in the area, encouraging development of traditional agriculture through the new the latest research and development centre.

It hopes to help breathe new life into a kind of “barefoot tourism” which would educate and allow visitors to see and join in with activities related to the region's culture. Visitors would stay in traditional style accommodation, with modern amenities and will feast on fresh local produce.

The villages have already begun this process, but now the establishment of the new campus has the potential to provide a huge boost to the economy of the area.

Long ago, one of the biggest and most prosperous cities in the island was Karpasia, on the north coast of the peninsula. This project has grown in the mind of Serhat Akpinar for a long time. Now it is really coming to life.

Do the bees know something we only suspect?