Final figures for the Met’s latest operation to crack down on drivers illegally using London’s roads this festive season have been released by police showing that 13 vehicles were seized and four people arrested in Haringey borough. 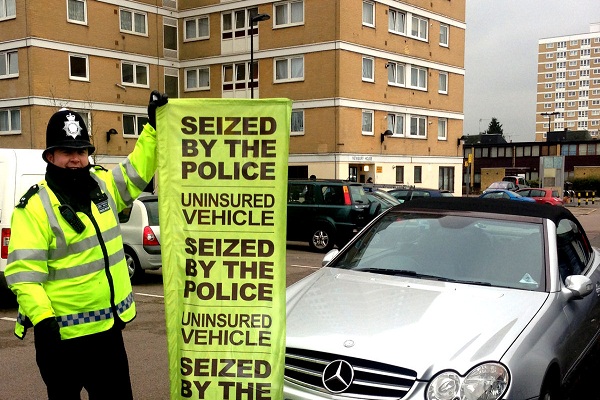 The four arrests in Haringey were made on suspicion of offences including forged documents and theft, and cars seized included a 2011 Audi and a 2011 Mercedes.

Haringey Police Tweeted "One of the nicest cars seized under #opcubo today? 2011 reg Mercedes #noinsurancenocar See the smile behind the scarf! pic.twitter.com/o9hF9mZB" on the @MPSHaringey Twitter channel at 4.33pm on 18 December, which sparked an interesting session of Tweets with a young follower.

Borough Commander Sandra Looby said: “Yet again Operation Cubo has achieved some outstanding results. Police know that 80% of uninsured drivers are habitual criminals - and they are five times more likely to be involved in collisions.

“These operations are about disrupting the offenders that use their cars to commit crime in Haringey borough and beyond, and to transport weapons, drugs and stolen property.

“We will continue to target uninsured drivers into 2013, with the additional support of a dedicated new investigation team and enhanced technology.”

Statistics from yesterday’s [18 December] Operation Cubo, the 14th to be conducted, showed that, across London, the total number of vehicles seized was 552, while 105 people were arrested for offences including driving whilst uninsured, drink driving, driving whilst disqualified, immigration offences, fraud, handling stolen goods, and one wanted on warrant for assault. More than 1,250 officers took part in a co-ordinated series of operations in all 32 boroughs which lasted from 7am up until 10pm.

The day of action began with MPS Commissioner Bernard Hogan-Howe and the Mayor of London, Boris Johnson sending a graphic warning to motorists by posing together outside New Scotland Yard next to seized and crushed cars to demonstrate what could happen to a vehicle driven illegally in the capital.

Since the Commissioner launched Operation Cubo in October 2011, the total number of vehicles seized has risen to more than 44,000 - the most the Met has ever seized in one year - and more than 1,000 people have been arrested under Cubo for offences including rape, possession of illegal firearms, money laundering and drugs.  Firearms, other weapons and large quantities of cash and drugs have also been recovered.

The enormous haul of uninsured vehicles seized from drivers cuts across the spectrum from Fords to Ferraris. Luxury cars seized over the past year have also included Bentleys, Aston Martins, Porches, Rolls Royce's and a Lamborghini.

In excess of £1million has been raised to date through the scrap and auction of thousands of vehicles seized under Operation Cubo, with money raised over and above the total costs of operational activity going directly back into frontline policing.

Officers target uninsured drivers through the use of roadside check points using ANPR, fixed cameras and routine number plate checks.  Uninsured vehicles are immediately seized and potentially destroyed, whilst offenders will be prosecuted. The penalty for driving a vehicle without insurance is six penalty points and a £200 fine, and can lead to a driving ban.