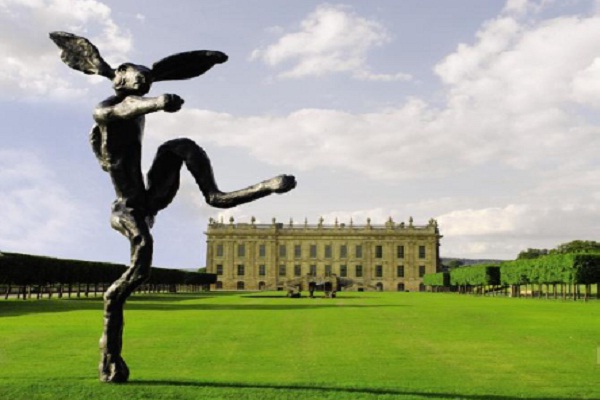 SOTHEBY’S annual selling exhibition of monumental sculpture, Beyond Limits, staged in the historic grounds of Chatsworth House, will be on view from 7th September to 28th October 2012. Now in its seventh year, for the first time, Beyond Limits will showcase the work of a single artist, Barry Flanagan, RA OBE (1941-2009).

Following Tate Britain’s recent retrospective Barry Flanagan: Early Works 1965–1982, which closed in January 2012, Sotheby’s is presenting a selection of fifteen of the artist’s critically acclaimed monumental late works. Bronze hares, elephants and horses, represented in a variety of highly inventive guises - as dancers, acrobats, sportsmen and philosophers - have been installed throughout the grounds of Chatsworth in a witty and engaging counterpoint to the landscape and gardens. This will constitute the largest ever exhibition of Flanagan’s monumental bronzes.