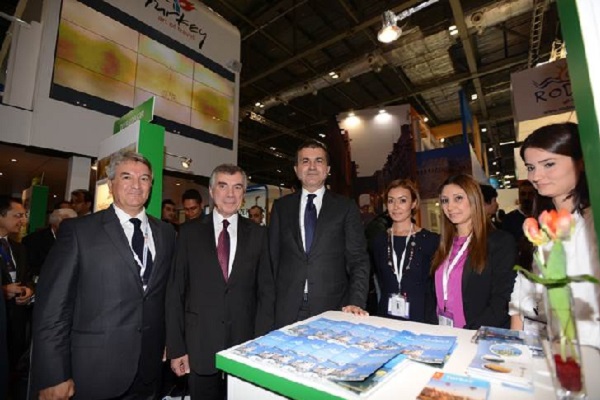 LONDON (5th November 2013) --- The Turkish Minister of Culture and Tourism, Ömer Çelik, opened Turkey’s stand EM800-850 on Monday, the first day of the World Travel Market (WTM) which is occupying a prominent space this year at 965.25 square meters this year. Opening the Turkey stand at WTM together with the Minister was the Turkish Ambassador H.E. Unal Cevikoz.

Until November 7th, Turkey is exhibiting a pavilion dedicated to the diversity of the country, highlighting the country's principal tourist and coastal destinations, including many of its 383 Blue Flag beaches; together with its cultural, adventure and luxury offerings.   WTM is considered one the leading trade fairs in the global tourism industry welcoming 47,776 visitors from around the world.

Commenting on Turkey’s stellar growth story, the Minister said “latest figures indicate that Turkey’s growth trajectory will continue on its upward trend which is even more remarkable given the global downturn.  Turkey received 35.7 million visitors in 2012, with the country ranking 6th in terms of the number of these arrivals, according to the World Tourism Organisation (WTO). By the end of September this year 28.35 million foreign visitors had arrived in Turkey – an impressive increase of 10.09% compared to the same period in 2012. Our over-arching tourism plan is to boost total arrivals from 35.7 to 50 million by 2023 and to that end we will continue to diversify both tourism products and incoming tourist profile by enhancing different segments of our tourism offering.”

Turkey also continues to go from strength to strength as one of the most popular and affordable holiday destinations for the UK with the country ranking 6th for Britons travelling to short-haul destinations. In 2012, 2.46 million Brits visited Turkey, spending a total of £654 million while holidaying there. By the end of September 2013, Turkey had attracted 2.12 million British visitors, an increase of 2.04% for the same period the previous year.

Mirroring this success, Turkey’s presence at WTM comprises of 63 partner stand-holders participating this year.  Turkey will also be hosting part of the exciting WTM Social Travel Market events on its stand for the second time following its huge success last year, highlighting the Turkish Culture and Tourism Office UK’s new social media campaigns on Facebook and Twitter on Thursday 7thNovember from 10:30 -12:30.