US: Migration policies cause graphic deaths at border 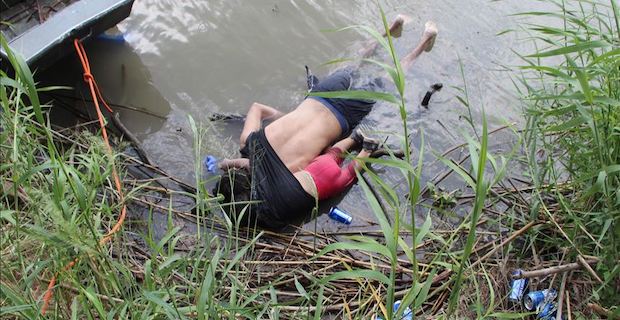 The heart-wrenching image of a deceased Salvadoran father and his baby daughter lying face-down on the bank of the Rio Grande river at the U.S.-Mexico border was reminiscent of past failures to address the issue of migration in countries across the globe.

The bodies of Oscar Alberto Martinez Ramirez and his two-year-old daughter Valeria were found a day after they tried cross the river on Sunday, as his wife, Tania, looked on from the Mexican shore.

Their photo evoked memories of three-year-old Syrian toddler Aylan Kurdi, whose body washed up on a Turkish beach in 2015 while on the asylum journey across the Aegean Sea to Europe.

Droves of migrants from Central American countries try each year to cross the treacherous deserts and rivers on the way to the U.S. in a bid to flee violence and poverty in their home countries.

According to the Missing Migrant Project, an NGO initiative that tracks the deaths of migrants around the world, 214 men, 20 women and four children died in 2018 while trying to migrate to the U.S.

However, the remains of as many as 138 could not be identified for age or sex, and the exact number remains unknown because many are simply never found.

In addition to hundreds who die during the final crossing, those who survive but are apprehended on U.S. soil are held in facilities criticized for inhumane conditions and lacking sanitation, food and water.

On June 7, the U.S. and Mexico reached an agreement for Washington to refrain from imposing tariffs in return for Mexico reducing immigration flows to the border.

Announcing the agreement after two days, Trump did not offer specifics, but the State Department later released a joint declaration from the countries that includes a series of further steps the U.S. and Mexico would take to stem the flow of undocumented immigration from Central America to the U.S.

Early in May, Trump announced tariffs on imports of Mexican goods would begin to take effect on June 10 and rise 5% at the start of each successive month until they hit 25% in October "if the crisis persists".

The president has pursued a hardline approach to immigration since coming to office and has particularly singled out Mexico for what he says is a lack of action to stem migrant flows from Central America, where people are fleeing destitute conditions including rampant poverty and gang violence in the hopes of securing safety or asylum in the U.S.

Keywords:
Migration
Your comment has been forwarded to the administrator for approval.×
Warning! Will constitute a criminal offense, illegal, threatening, offensive, insulting and swearing, derogatory, defamatory, vulgar, pornographic, indecent, personality rights, damaging or similar nature in the nature of all kinds of financial content, legal, criminal and administrative responsibility for the content of the sender member / members are belong.
Related News