US leaves about 700 troops in Jordan

US had previously decided to leave Patriot missiles and warplanes in Jordan, and Obama said the deployment was done at the request of the Jordanian government. 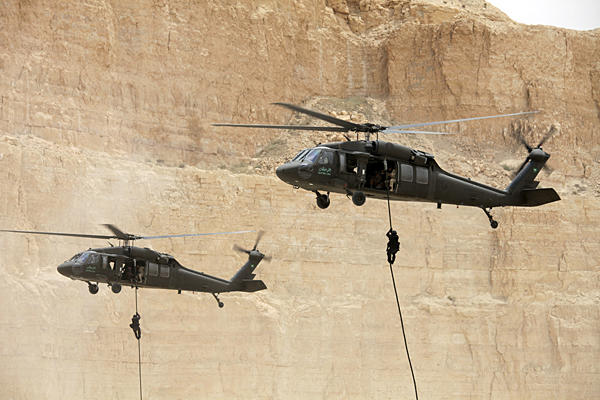 The United States, keeping a wary eye on Syria's civil war, has left about 700 combat-equipped troops in Jordan after a training exercise, President Barack Obama said on Friday, after previously deciding to leave Patriot missiles and warplanes there. Obama said the deployment was done at the request of the Jordanian government, which fears a spillover of the war into its territory and where an estimated half-million Syrian refugees have fled to escape the bloodshed. In a letter to House of Representatives Speaker John Boehner, the president said about 700 of the troops deployed to Jordan as part of a training exercise that ended on Thursday would remain behind. They will stay until the security situation becomes such that they are no longer needed, Obama said. "This detachment that participated in the exercise and remained in Jordan includes Patriot missile systems, fighter aircraft, and related support, command, control, and communications personnel and systems," Obama said.

Obama has taken a go-slow approach on Syria. His administration took weeks to conclude last week that the Syrian government had used chemical weapons, killing an estimated 100 to 150 people.

He has pledged to provide the Syrian rebels some light arms but not heavy-duty weaponry that some Republican lawmakers would prefer.

When the Pentagon first said last week it would leave Patriot missiles and F-16 fighters in Jordan, Russia, an ally of Damascus, said any attempt to use them to impose a "no-fly" zone over Syria would be illegal.

Obama has not ruled out participating in a no-fly zone that would prohibit the Syrian military from flying its aircraft, but he was skeptical about such a move in a television interview earlier this week.

The decision to leave 700 troops in Jordan was an important show of force and a statement of U.S. backing of Jordan's King Abdullah, a close U.S. ally whom Obama visited in March.

The Patriot missiles could be used to protect Jordan against any possible missile attack as the Syrian war threatens to widen into a more regional, sectarian conflict.