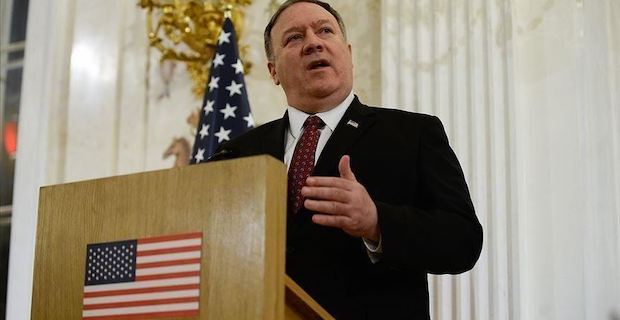 Pompeo said these aircraft were blacklisted because they have been involved in the "harassment of U.S. military flights in Caribbean airspace or have been used to transport senior members of the illegitimate former [President Nicolas] Maduro regime, which continues to subject the people of Venezuela to brutal and dictatorial practices."

He notified the Americans by saying they may not transact with these aircraft -- includes chartering, contracting, refueling, or purchasing them -- except as otherwise authorized.

"This action furthers U.S. efforts to use targeted sanctions and steady diplomacy to end Maduro’s attempts to usurp power, and to support a Venezuelan transition to democracy, including free and fair presidential elections," Pompeo added.

Venezuela is under severe U.S. sanctions for more than a year as Washington recognizes the country's opposition leader Juan Guaido as the legitimate ruler instead of elected President Maduro.

Meanwhile, Guaido denounced the Maduro regime by retweeting a video, in which the opposition lawmakers claim that officials from Venezuela's intelligence service SEBIN raided Guaido's offices.

"While I am on tour, consolidating support to overcome the tragedy that Venezuelans are experiencing, they show themselves without shame: they kidnap Deputy Ismael Leon and pave our office," Guaido said.

Guaido arrived in Colombia on Sunday to meet with President Ivan Duque and participate in a regional counter-terrorism meeting. It is the second time he defies the ban to travel imposed by Venezuela’s Supreme Court.

After the conference, Guaido headed to the World Economic Forum in Davos, as he rallies international support for his campaign against Maduro.

Jorge Rodriguez, communication and information minister of Venezuela, responded to the claims late Tuesday, saying security officials raided offices of the brothers Julio and Alfredo Volante Zuloaga in the Zurich Tower and it was part of a corruption and money laundering investigation.

Since the beginning of 2019, Venezuela has been embroiled in political unrest as Maduro and Guaido engage in a power battle, while the country's economy has been in precipitous decline following a global downturn in the price of crude oil.

Keywords:
US Blacklists
Your comment has been forwarded to the administrator for approval.×
Warning! Will constitute a criminal offense, illegal, threatening, offensive, insulting and swearing, derogatory, defamatory, vulgar, pornographic, indecent, personality rights, damaging or similar nature in the nature of all kinds of financial content, legal, criminal and administrative responsibility for the content of the sender member / members are belong.
Related News