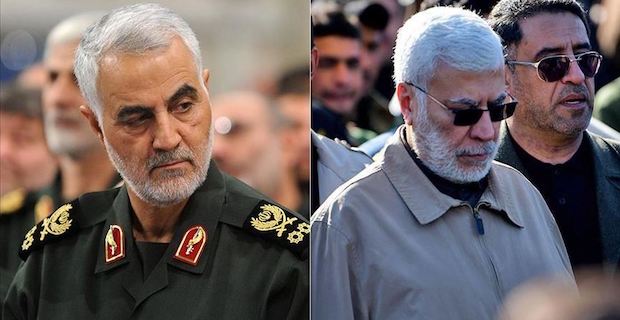 The U.S. confirmed Thursday that it carried out a strike that killed Qasem Soleimani, commander of the Iranian Revolutionary Guards Corps’ Quds Force, in the Iraqi capital Baghdad.  The strike near Baghdad International Airport also killed Abu Mahdi al-Muhandis, vice president of the Hashd al-Shaabi group, or Popular Mobilization Units (PMU), local media reported. "At the direction of the President [Donald Trump], the U.S. military has taken decisive defensive action to protect U.S. personnel abroad by killing" Soleimani, the Pentagon said in a statement.

Soleimani was the long-time commander of the Quds Force, which has been a designated terror group in the U.S. since 2007. The group is estimated to have 20,000 members.

Shortly after the reports on the slain military leaders, Trump posted the U.S. flag on Twitter with no comment.

"He had orchestrated attacks on coalition bases in Iraq over the last several months -- including the attack on December 27th -- culminating in the death and wounding of additional American and Iraqi personnel," said the statement, adding Soleimani also approved the attacks on the U.S. Embassy in Baghdad that took place this week.

"This strike was aimed at deterring future Iranian attack plans. The United States will continue to take all necessary action to protect our people and our interests wherever they are around the world," said the statement.

Earlier in the day, Defense Secretary Mark Esper told reporters at the Pentagon that the U.S. sees indications that Iran and its proxies may be planning more attacks on its interests in the Middle East.

"We’ve seen this for two or three months now," said Esper, warning that the U.S. will act if any attack occurs.

"The game has changed, and we’re prepared to do what is necessary to defend our personnel and our interests and our partners in the region," he said.

Sen. Lindsey Graham said the airstrike was a "major blow" to Iran.

"Soleimani was one of the most ruthless and vicious members of the Ayatollah's regime. He had American blood on his hands," Graham said on Twitter, thanking Trump for "standing up" for the U.S.

"This action by President Trump and our military was in direct response to Iranian aggression orchestrated by General Soleimani and his proxies," he added.

Sen. Marco Rubio hailed the attack as "consistent with clear warnings" Iran and its proxies have received.

"They chose to ignore these warnings because they believed @POTUS was constrained from acting by our domestic political divisions. They badly miscalculated," Rubio tweeted.

The attack also prompted a backlash among several Democrat lawmakers, who accused Trump of sidelining congressional approval for carrying out the strike.

"Soleimani was an enemy of the United States. That’s not a question," Sen. Chris Murphy said on Twitter. "The question is this — as reports suggest, did America just assassinate, without any congressional authorization, the second most powerful person in Iran, knowingly setting off a potential massive regional war?"

Senator Tom Udall, a member of the Senate Foreign Relations Committee, accused Trump of "bringing our nation to the brink of an illegal war with Iran with no congressional approval."

Udall called for the urgent passing of a bipartisan amendment to prevent unconstitutional war with Iran.

"Congress needs to step in immediately," he wrote on Twitter.

The attack came amid Iranian tensions with the U.S. after thousands of Iraqis stormed the U.S. Embassy compound on Tuesday, protesting against airstrikes Sunday in Iraq and Syria against the Kataib Hezbollah militia which killed at least 25 fighters.

The airstrikes were in response to a rocket attack Friday on a U.S. military base in Kirkuk blamed on Kataib Hezbollah, which is part of the Iran-backed Hashd al-Shaabi group. Friday's attack killed one U.S. contractor and wounded four U.S. service members.

Keywords:
Qasem Soleimani
Your comment has been forwarded to the administrator for approval.×
Warning! Will constitute a criminal offense, illegal, threatening, offensive, insulting and swearing, derogatory, defamatory, vulgar, pornographic, indecent, personality rights, damaging or similar nature in the nature of all kinds of financial content, legal, criminal and administrative responsibility for the content of the sender member / members are belong.
Related News