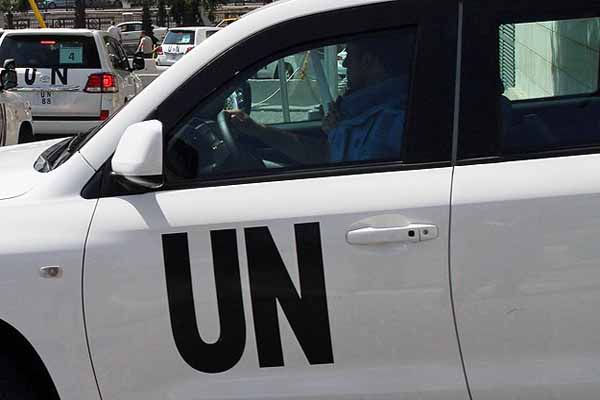 Unidentified snipers shot at and damaged a vehicle being used by U.N. chemical weapons investigators in Damascus on Monday as they sought to reach the site of a suspected poison gas attack, a U.N. spokesman said. "The first vehicle of the Chemical Weapons Investigation Team was deliberately shot at multiple times by unidentified snipers in the buffer zone area," the spokesman said, adding the car was no longer serviceable and a replacement vehicle was being obtained.

The Syrian General Revolution Council's media representative Ebu Muhammad told to an AA correspondent that UN experts were blocked at the Muaddamiye area. "The UN chemical experts came under attack from an air intelligence unit near the Mezze Military Airport. Regime forces prevented UN experts from entering the area," Ebu Muhammad claimed. He said that one car broke down due to shooting.

Meanwhile, a UN spokesman said that a vehicle belonging to inspectors had been "deliberately shot at multiple times" by snipers. Martin Nesirky says the team will return to the area after replacing the vehicle.

Syrian forces launched a chemical attack against the civilian population last Wednesday, prompting an International outcry which forced Damascus to allow UN experts to visit the area to investigate claims of chemical weapons use. As a result of the chemical attack, 1,300 people are believed to have died.