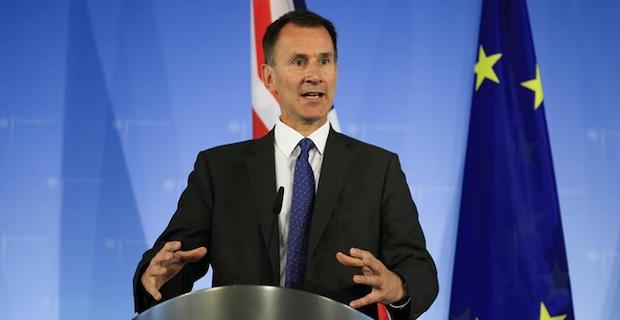 The British foreign secretary on Monday welcomed EU sanctions on nine Syrians and Russians over the alleged use of chemical weapons.

"The U.K. will continue to show willingness to stand up for the international rules that keep us safe and which the Kremlin and the Assad regime seek to undermine," Jeremy Hunt said, adding that the U.K. has been at the vanguard of this move.

"Today’s new sanctions deliver on our vow to take tough action against the reckless and irresponsible activities of the Russian military intelligence organization, the GRU, which put innocent British citizens in serious danger in Salisbury last year," Hunt added.

Hunt said they have also "imposed sanctions on individuals and an organization responsible for the Syrian regime’s abhorrent use of chemical weapons over many years, including in Douma in April 2018."

The EU on Monday sanctioned nine individuals under the new regime of restrictive measures against use and proliferation of chemical weapons.

In a statement, the EU officials said the sanctions have been imposed on head and deputy head of the GRU and two more officials "for possession, transport and use of chemical weapons in the Salisbury nerve agent attack."

The sanctions have also been imposed on Syria's state-run Scientific Studies and Research Center (SSRC) for the development and production of chemical weapons, as well as five Syrian officials associated with it, the statement said.

The British Foreign Office said in a statement that "the sanctions listings are the first under the new EU sanctions regime focused on combatting the use of chemical weapons."

In March last year, former Russian spy Sergei Skripal, 66, and his daughter Yulia were admitted to a hospital after being found unconscious in the southern English city of Salisbury, poisoned by Novichok, a military-grade nerve agent of a type developed by Russia, according to British authorities.

Skripal and his daughter were released after months of treatment and a police officer involved in the case also had to undergo treatment.

Russian military officers Ruslan Boshirov and Alexander Petrov, the two main suspects in the poisoning, smuggled in the nerve agent in a perfume bottle, British police said in September.

After the men denied any role in the poisoning in an interview with Russian state TV, the British government denounced Russia’s "obfuscation and lies" in the case.

Keywords:
Foreign Secretary Jeremy HuntJeremy HuntEUUK
Your comment has been forwarded to the administrator for approval.×
Warning! Will constitute a criminal offense, illegal, threatening, offensive, insulting and swearing, derogatory, defamatory, vulgar, pornographic, indecent, personality rights, damaging or similar nature in the nature of all kinds of financial content, legal, criminal and administrative responsibility for the content of the sender member / members are belong.
Related News