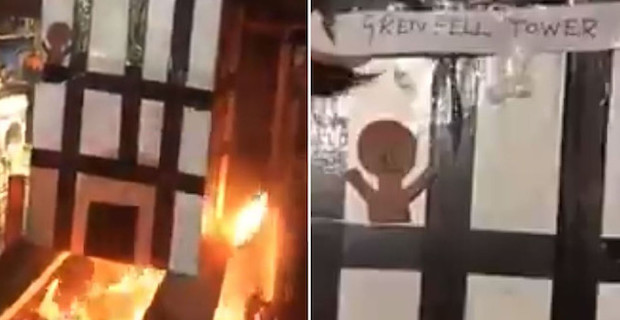 British Prime Minister Theresa May has slammed a video that shows a group of people burning an effigy of Grenfell Tower, where 72 people died in one of the UK’s worst fire disasters.

“To disrespect those who lost their lives at Grenfell Tower, as well as their families and loved ones, is utterly unacceptable,” May said Monday on Twitter shortly after the video went viral on WhatsApp and social media.

“Have just become aware of the sickening video depicting the burning of an effigy of the Grenfell Tower on a bonfire,” Brokenshire tweeted.

“Utterly disgusting & those responsible should be ashamed of their actions, which are beneath contempt.

“At a time when the bereaved and survivors are giving testimony to the Grenfell Inquiry and reliving the unimaginable horror of that tragedy, it beggars belief that anyone should do this,” Brokenshire said later in a government statement.

He said the police have been made aware of the video and will work to establish whether any offences have been committed.

“I would urge people not to continue to share this video,” he added.

“These people are a disgrace,” he said on Twitter.

In a separate statement, the Metropolitan Police said the Grenfell Tower investigation team is making inquiries into the video.

“I am frankly appalled by the callous nature of the video posted online,” said Commander Stuart Cundy, who is leading the investigation into the Grenfell Tower fire.

“So many people lost so many loved ones, and many more have been deeply affected. To mock that disaster in such a crude way is vile,” Cundy said.

“I can’t imagine the distress this video will undoubtedly cause to bereaved families and survivors.”

He added that the team is taking the matter very seriously and any offences that have been committed will be fully investigated.

The final death toll in one of the worst fire disasters in the UK is 72, including 18 children and a stillborn baby, according to British police.

The June 14 fire, which cost the lives of scores of mostly Muslim residents, was blamed on a faulty fridge, according to reports. The blaze spread quickly due to the building's cladding, which was thought to have worked as an accelerator.

A public inquiry ordered by May and a police inquiry are still underway to determine the cause of the disaster and the reasons for the high death toll.

Keywords:
Burning Grenfell TowerVideo Of Burning Grenfell TowerTheresa May
Your comment has been forwarded to the administrator for approval.×
Warning! Will constitute a criminal offense, illegal, threatening, offensive, insulting and swearing, derogatory, defamatory, vulgar, pornographic, indecent, personality rights, damaging or similar nature in the nature of all kinds of financial content, legal, criminal and administrative responsibility for the content of the sender member / members are belong.
Related News