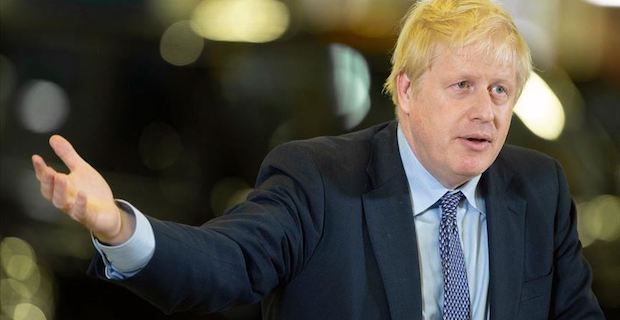 Following weeks of turmoil and death resulting from U.S.-Iranian tensions, Britain on Tuesday urged a new nuclear deal with Iran. In his first exclusive interview since the December election, British Prime Minister Boris Johnson told the BBC that work is needed to negotiate a new deal that would replace the previous 2015 deal, also known as the Joint Comprehensive Plan of Action (JCPOA).

"Let's work together to replace the JCPOA and get the Trump deal instead," Johnson said, referring to U.S. President Donald Trump, who unilaterally withdrew from the deal in 2018, claiming it was flawed beyond fixing.

“Somehow or other, we've got to stop the Iranians acquiring a nuclear weapon," Johnson underlined.

“Let’s replace it [JCPoA] with a Trump deal.”

Iran announced, following the death of Gen. Qasem Soleimani in a U.S. airstrike in Baghdad, that it would no longer comply with any commitments under the 2015 deal signed with several world powers.

"By taking the fifth step in reducing its obligations, Iran is abandoning the last key practical limitation under the Joint Comprehensive Plan of Action, which deals with the number of centrifuges,” Iran said in a statement.

Iran said it would continue to work with the International Atomic Energy Agency (IAEA).

The existing accord was signed in 2015 between Iran and Russia, China, France, the U.K. and the U.S. plus Germany.

After the killing of Soleimani, Iran targeted U.S. forces in Iraq, apparently without any casualties. Last Friday, however, a passenger jet leaving Tehran went down, killing all 176 people on board -- "accidentally" shot down by an Iranian missile, Iran later admitted.

Tensions had been rising between the U.S. and Iran since May 2018, when Trump unilaterally withdrew from the landmark deal.

As part of its campaign, the U.S. has re-imposed sanctions on exports of Iranian crude oil, which have severely affected Iran’s economy.

Keywords:
Boris JohnsonIran
Your comment has been forwarded to the administrator for approval.×
Warning! Will constitute a criminal offense, illegal, threatening, offensive, insulting and swearing, derogatory, defamatory, vulgar, pornographic, indecent, personality rights, damaging or similar nature in the nature of all kinds of financial content, legal, criminal and administrative responsibility for the content of the sender member / members are belong.
Related News