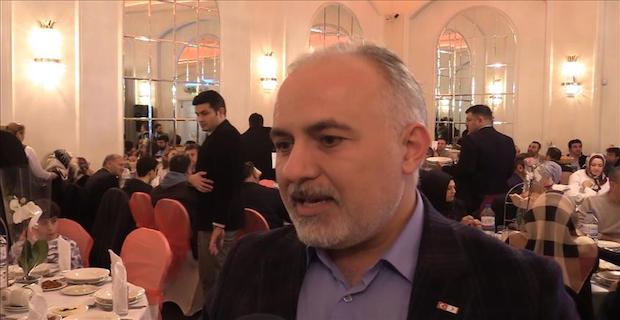 Speaking to Anadolu Agency at the Help Yemen Now event jointly organized by the Union of International Democrats (UID) and eight non-governmental organizations, Kerem Kinik said Yemen has had a deepening crisis since 2015.

"There is a serious political crisis [in Yemen] and a humanitarian crisis caused by it," Kinik said.

He said: "Aid can be shipped through various channels. Kizilay runs these operations via its permanent delegation in Aden. Last year, we delivered nearly 13,000 tons of food to almost all regions in Yemen."

Kinik said delivering aid to Sana’a and its surrounding region became easier thanks to a UN-brokered deal for access to the Hudaydah port and asserted that Kizilay now helps almost 1,000 families every month.

Kinik said: "17-18 million people, including 400,000 children, are in need of humanitarian aid and if they cannot receive this aid, they may die."

He added: "There is a cholera epidemic as well as other diseases. We have shipped 60 tons of cholera medicine and established two desert hospitals with our Health Ministry. The aid needs to continue increasingly."

He underlined that the UN described the crisis in Yemen as “the greatest problem caused by humans for other humans.”

Kayaturk said Turkey does its part with its agencies such as Kizilay, the Turkish Cooperation and Coordination Agency (TIKA) and Disaster and Emergency Management Authority (AFAD) and delivers aid to Yemen, adding that President Recep Tayyip Erdogan always raises the Yemen issue during his visits abroad.

He said Iran and the Gulf countries are deepening the crisis in Yemen by using various groups, but “the correct way should be found between those two mistakes.”

“We need to create a medium where Yemen’s people could solve their own problems ,” Kayaturk added.

The UID’s London branch chair Erdal Yetimova told Anadolu Agency that the aid and funds collected by eight NGOs will be delivered to Yemen by the Turkish Red Crescent.

Umit Yalcin, the Turkish Ambassador to London, and journalist Lauren Booth were among many guests at the event.

Keywords:
Turkish Red CrescentKerem KinikKizilay
Your comment has been forwarded to the administrator for approval.×
Warning! Will constitute a criminal offense, illegal, threatening, offensive, insulting and swearing, derogatory, defamatory, vulgar, pornographic, indecent, personality rights, damaging or similar nature in the nature of all kinds of financial content, legal, criminal and administrative responsibility for the content of the sender member / members are belong.
Related News