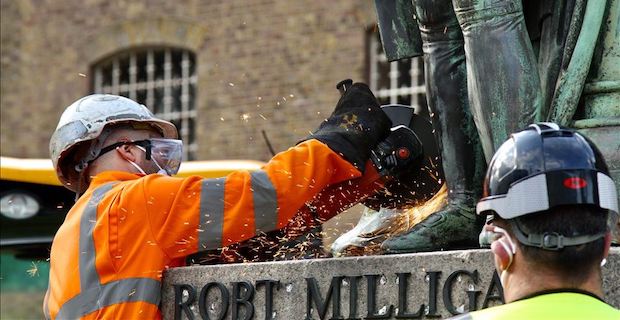 A statue of 18th Century British slave owner Robert Milligan was removed from outside the Museum of London Docklands Tuesday afternoon shortly after a statement from its owners. The move came as the reaction to statues of such individuals who had been involved in the slave trade or owned slaves is mounting parallel with Black Lives Matter protests sparked by the killing of George Floyd in the US.  The Canal and River Trust said earlier that it was working towards removing the statue “as soon as possible.”

The action followed a decision by London Mayor Sadiq Khan to review London’s landmarks “to reflect the city’s diversity.”

Tower Hamlets councilor Ehtasham Haque recently put up an online petition for the removal of the statue and received more than 1,000 signatures within the first 24 hours.

Speaking to Anadolu Agency as the statue was being pulled down, Haque said he was "relieved.”

He said the removal of the statue was “our contribution to the campaign for justice to our brother George Floyd…We have removed the statue of a slaver, Robert Milligan, who used to own 526 slaves when he died in 1809.”

Haque said the statue was still up there as if to say to people “you should learn history from it,” adding it was erected to “glorify this person.”

“So it has no relevance to 21st Century civilized society.”

He said he was pleased to see that the statue was removed peacefully.

Khan said Tuesday that a newly formed commission may recommend the taking down of some statues in the capital.

“It is an uncomfortable truth that our nation and city owes a large part of its wealth to its role in the slave trade, and while this is reflected in our public realm, the contribution of many of our communities to life in our capital has been willfully ignored,” he said. “This cannot continue.”

“We must ensure that we celebrate the achievements and diversity of all in our city, and that we commemorate those who have made London what it is – that includes questioning which legacies are being celebrated.”

Khan said the Black Lives Matter protests “have rightly brought this to the public’s attention, but it’s important that we take the right steps to work together to bring change and ensure that we can all be proud of our public landscape.”

The Commission for Diversity in the Public Realm will review murals, street art, street names, statues and other memorials and consider which legacies should be celebrated before making recommendations.

Some protesters in London scrawled graffiti on a statue of Sir Winston Churchill in Parliament Square over the weekend.

Prime Minister Boris Johnson condemned the actions toward the statues and memorials, including the Cenotaph in White Hall, describing them as “thuggery” by a minority that marred the Black Lives Matter demonstrations.

Home Secretary Priti Patel said the toppling of a statue of slave trader Edward Colston in Bristol on Sunday was "utterly disgraceful" and "undermines" anti-racism protests and ordered an investigation into the incident.

The trading of slaves in Britain was a common practice among various nobles and merchants between the 16th and 19th centuries, and many statues in the capital can be linked to the trade.

Hundreds of thousands of black people were bought and sold in slave markets across the country and in its colonies.

Portugal and Britain were the two most “successful” slave-trading countries, accounting for about 70% of all Africans transported to the Americas, according to the national archives.

Britain was the most dominant between 1640 and 1807, when the British slave trade was abolished.

It is estimated that Britain transported 3.1 million Africans to the British colonies in the Caribbean, North and South America, and to other countries, and approximately 400,000 of them never completed the journey due to factors such as dehydration, disease, and inhumane and overcrowded conditions.

Keywords:
George FloydRobert MilliganSlaveBlack Lives Matter
Your comment has been forwarded to the administrator for approval.×
Warning! Will constitute a criminal offense, illegal, threatening, offensive, insulting and swearing, derogatory, defamatory, vulgar, pornographic, indecent, personality rights, damaging or similar nature in the nature of all kinds of financial content, legal, criminal and administrative responsibility for the content of the sender member / members are belong.
Related News